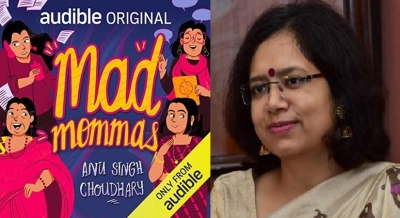 New Delhi– For screenwriter and filmmaker Anu Singh Choudhary, the question that led to the Audible Original series ‘Mad Mommas’ was: ‘Have the gender roles within families really shifted during these turbulent times?’ She has recently written the series which captures the lives of four working mothers caught up in the work-life balancing act.

Choudhary the author of ‘Neela Scarf’ (collection of short stories), ‘Mamma Ki Diary’ (memoir) and ‘Bhali Ladkiyaan, Buri Ladkiyaan’ (novel), says it was curiosity around gender roles in the pandemic’s context that led her to hear experiences of women around her. Some of these narratives and experiences are, she says, strung together as this relatable and humorous audio series.

Set in Gurugram and Delhi in the midst of the Covid-19 pandemic, ‘Mad Mommas’ touches on the bittersweet realities of four women who are in different stages of motherhood. It is narrated by famed TV journalist and RJ Richa Anirudh.

The story is told from the point of view of a successful TV anchor, Niyati Ahuja Sabharwal, who has just become a mother, as she tries to navigate through marriage, kids, family and the ongoing pandemic. Her life is intertwined with that of three other mothers: a stay-at-home Mum who gave up her practice as a Doctor to raise her kids; a psychotherapist and mother of a teen who is specialist on Mommy counselling and a grandmother (Niyati’s mother) who is a health and discipline freak.

Choudhary has also co-written the blockbuster web-series ‘Aarya’, and is currently writing its subsequent season. She will also be speaking at this year’s Jaipur Literature Festival and is in conversation with journalist Vijai Trivedi’s Hindi book, ‘Sangham Sharanam Gachchami’, on the Rashtriya Swayamsevak Sangh (RSS).

Excerpts from the interview :

Q. Women have carried out the dual responsibility of work and home. How have you tried to capture that in ‘Mad Mommas’?

Anu: We have followed women’s stories and tried to be honest about it. The title ‘Mad Mommas was conceived and created during Covid-19 times. There were several stories, both personal and otherwise, that were being shared in popular media about how this was a monumental period in the lives of people working from home and the responsibility of taking care had fallen on both men and women. I was curious to know how much of the gender roles had shifted within the family systems during these turbulent times. I reached out to mothers of all ages to see how they were coping with Covid-19 while balancing work, home, children and elderly parents.

While it had been appalling, and even sometimes heartwarming to see that men were sometimes sharing responsibilities of the household work, there had been several instances where it was presumed that women would juggle as effortlessly as they have always done. A lot of women ended up working more and more, because children were home. There were stories of relationships crumbling and challenges women were faced with. Those stories became part of the series.

The protagonist is a TV journalist. When a young mother is at a crucial point in her career, now also has to be very careful about the pandemic, how does she cope? All these questions and concerns made their way into the story.

Q. The pandemic has disproportionately affected women. There is a social pattern and many women have been pushed back into the four walls of the household. What are your thoughts on this?

Anu: When there is a catastrophe, calamity or challenge that pushes the world into transition, one hopes that it will bring about some positive change, especially for women. Look at stories from conflict-ridden zones, and you’d find women and children are the one suffering the most. The pandemic was affecting mental and physical health across, but one change that I saw was that women were coming together as part of support groups as spaces of sharing stories, advice and information. Several women entrepreneurs also got some business ideas from these networks. This watershed moment has also given us some interesting ideas. If anything that has happened, it has made women and female friendships more resilient.

Q. What are your thoughts on the medium of audio for storytelling?

Anu: I write for a variety of formats, but I really enjoy writing for this format, and also listening to audio because it’s intimate, because I can easily spend an hour with my headphones while walking, driving or travelling. I’m not tiring my eyes, yet I’m getting an immersive experience as being part of the audience. I, personally, also find the audio medium very viable because I don’t have to carry heavy books or tire my eyes, yet I’m getting the gratification.