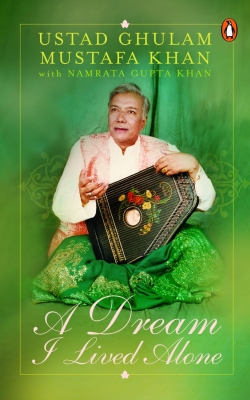 New Delhi–Not many know that when renowned Indian classical musician and Padma Vibhushan recipient late Ustad Ghulam Mustafa Khan was just a child and had has difficulties in speech, his father would put him on his chest, face downwards and sing, so he would imitate and try to sing along. The nugget from his inspiring life, and many others, find place in the book ‘A Dream I Lived Alone’.

Guru to renowned artists such as Asha Bhosle, Manna Dey, Geeta Dutt Roy, A.R. Rahman, Hariharan, Waheeda Rahman, Shaan, and Sonu Nigam, among others, the music legend passed away on January 17 at the age of 89 in Bandra.

Performing since he was eight years old, his career spans over a period of seventy-five years.

The book, co-written by the late Ustad Ghulam Mustafa Khan and his daughter-in-law Namrata Gupta narrates his life’s story-from practicing music in a graveyard as a young boy to teaching stalwarts of the music industry.

Calling his journey is as lyrical as his songs, the book has an interesting anecdote — one that Namrata counts among her favourite — from when he ‘disturbed the dead’ for his riyaaz (practice) sessions.

“So I would run off to the local graveyard, which was desolate and quiet, a perfect place for me to do my riyaz. I did not have to worry about anybody listening to me, noting the mistakes I made, the false starts, the difficult parts that I would repeat, or even sometimes ignore. I could sing without any inhibition. Today I look back at this period in my life and I see a child sitting inside a dilapidated tomb for hours, pleased with the shade and the relief from the harsh sun, playing a makeshift tanpura quickly put together by a local carpenter simply employing a metal wire and a piece of bamboo,” recalled the award-winning music doyen in the book.

“As I had many events with my father-in-law, a legendary classical vocalist and a guru. I had an opportunity to discuss with him his life story of which I got inspired. So, I thought his story needed to be penned down in a book. I started noticing his everyday things he did differently in a different way. Then I started noting down all what he shared and discussed with me.

“When I became a part of this culturally rich family as a daughter in law, I found myself in the unique position of being a member of this family as well as someone who could give a fresh look with words in the book ‘A Dream I Lived Alone’,” Namrata told IANSlife.

She adds that the book captures the candid side of his life. “I have written about the man behind the music, the struggle of his life, experiences, and travels which had made him the man which he is today. I have penned the insightful stories of his musical journey, his marriage and his family.

“The thought behind writing this book was to inspire, motivate generations to come, the research and endless attempts for him to open up to me without any inhibitions was challenging and equally rewarding for me,” says Namrata, the wife of Rabbani Mustafa, one of the four sons of the music legend.

‘A Dream I Lived Alone’ is a heart-warming story of love, riyaz, dedication and the maestro of music, Ustad Ghulam Mustafa Khan. (IANS)