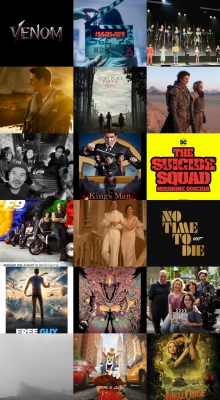 New Delhi–When it comes to Hollywood, 2021 is going to be a year of superheroes, reboots and follow-ups on the big screen — and, of course, James Bond.

IANS lists the Hollywood releases lined up in 2021 that sure gets us excited:

NO TIME TO DIE

Certainly the most talked-about Hollywood film not to release in 2020, Daniel Craig’s final outing as James Bond is now scheduled to release on April 2 this year. The 25th instalment of the franchise also features Rami Malek as the new Bond villain Safin, and brings back Lea Seydoux as Dr. Madeleine Swann, Ben Whishaw as Q, Ralph Fiennes as M, Naomie Harris as Moneypenny and Jeffrey Wright as CIA agent Felix Leiter. It is directed by Cary Joji Fukunaga.

Marvel Studios will finally release their solo “Black Widow” film, which aims to give a new twist to women power in the superhero universe. The film will bring back Scarlett Johansson as of Natasha Romanoff and her superhero alter ego Black Widow, as she traces her past to solve the puzzle of her life. The film was slated to release in 2020, but got pushed due to the Covid crisis. Now, it is slated to release on May 7.

Hollywood stars Vin Diesel and John Cena will give bromance a new spin in the upcoming “Fast & Furious” film, which will be fuelled by the emotion of vengeance. The saga sees the return of Justin Lin as director, who helmed the third, fourth, fifth and sixth chapters of the series. The film also stars Tyrese Gibson, Chris “Ludacris” Bridges, Jordana Brewster, Nathalie Emmanuel, Helen Mirren and Charlize Theron. It is expected to release in the first quarter of the year.

The Tom Holland-led film is expected to be a treat for franchise fans. Spider-Man’s new adventure will bring back Benedict Cumberbatch as the sorcerer superhero Doctor Strange and Alfred Molina as the evil Doctor Octopus. Jamie Foxx will reportedly appear as Electro. The upcoming adventure is expected to feature multiple generations of “Spider-Man” actors, with actors from past films in the series reprising their characters. The third “Spider-Man” film is scheduled for a theatrical release on December 17, 2021.

At 58, Hollywood superstar Tom Cruise will be back in his popular avatar as Pete “Maverick” Mitchell in “Top Gun: Maverick”, the much-anticipated sequel of the 1986 hit “Top Gun”. The Joseph Kosinski-directed film co-stars Jon Hamm, Jennifer Connelly, Glen Powell, Miles Teller and Jay Ellis. The trailer shows Maverick going back to Naval Fighter Weapons School to teach to the younger generations. It is slated to release on July 2.

Dwayne Johnson and Emily Blunt go on an action packed ride in the film based on the Disneyland ride of the same name. The Jaume Collet-Serra-directed film is set in the early 20th century, and follows the journey of a riverboat captain (Johnson) and scientist (Blunt) as they go into the jungles to find the Tree of Life. It is slated to release on July 30.

The John Krasinski and Emily Blunt-starrer was originally set to hit the big screen last March, but was among numerous Hollywood films delayed owing to Covid. It is now scheduled on April 23 this year. The horror film is a sequel of the 2018 winner “A Quiet Place”, which imagined a post-apocalyptic world where humans fall prey to fast-moving creatures who track their victims by sound.

VENOM: LET THERE BE CARNAGE

Tom Hardy’s much-anticipated “Venom” sequel is also slated to open this year. Andy Serkis has directed the second part of the action fantasy franchise, which sees Hardy take on an alien symbiote again for another adventure. It is expected to release in June.

James Gunn’s “The Suicide Squad” is a reboot of the 2016 film “Suicide Squad”, helmed by David Ayer. Margot Robbie, Joel Kinnaman and Viola Davis will reprise the roles they played in the first film. It stars Pete Davidson as Blackguard, John Cena as Peacemaker, Idris Elba as Bloodsport, Alice Braga as Sul Soria among others. It is expected to release in August.

Slated to open on March 12, the Matthew Vaughn-directorial is a prequel in the “Kingsman” film series. It is loosely based on the comic book series “Kingsman”, created by Dave Gibbons and Mark Millar. The film takes place decades before the first two instalments in the franchise so far — “Kingsman: The Secret Service” (2014) and “Kingsman: The Golden Circle” (2017). It features Ralph Fiennes, Gemma Arterton, Rhys Ifans, Matthew Goode, Daniel Bruhl and Djimon Hounsou.

The “Spider-Man” spinoff is slated to release on March 19. It stars Jared Leto in the titular role as Michael Morbius, a scientist who turns into a vampire.

Priyanka Chopra will be joining Keanu Reeves in the next part of “The Matrix”, which is expected to release later this year. The film is produced, co-written and directed by Lana Wachowski, who co-directed and co-wrote three of the previous films with her sister Lilly.

The live-action/ CG-animated film features the iconic cartoon characters as they go on another fun-filled adventure. The film stars Chloe Grace Moretz and Michael Pena. It is expected to open in the first quarter of the year.

Directed by Paul WS Anderson, the film is based on the video game series of the same name. The film stars Milla Jovovich, Tony Jaa, Tip “T. I.” Harris, Meagan Good, Diego Boneta, Josh Helman, Jin Au-Yeung and Ron Perlman. It is expected to release in the first quarter of the year.

The Ryan Reynolds-led action comedy is about a non-player character in a video game. The Shawn Levy-directed film also stars Jodie Comer, Joe Keery, Lil Rel Howery, Utkarsh Ambudkar and Taika Waititi. It is slated to release on May 21.

SHANG-CHI AND THE LEGEND OF THE TEN RINGS

Marvel’s first Asian origin superhero will be introduced this year, with the Destin Daniel Cretton directorial. In the film, Simu Liu stars as the title character with Awkwafina in an unspecified role and Tony Leung playing the iconic comicbook villain known as The Mandarin. It is slated to release on July 9.

Directed by Chloe Zhao, the film stars Angelina Jolie, Richard Madden, Kit Harington, Gemma Chan, Salma Hayek and Kumail Nanjiani. It is about the super-powered beings, The Celestials, and their villainous adversaries, The Deviants, in a war set millions of years ago. Nanjiani had revealed that his character will have the secret identity of a Bollywood star. It is expected to open on November 5, 2021.

Filmmaker Steven Spielberg has reimagined the musical “West Side Story” for the big screen. The classic New York tale tells the story of two lovers — Maria, a Puerto Rican, whose brother Bernardo is the leader of the “Sharks” street gang, and Tony, a former leader of the “Jets”, who battled the Sharks. The film is at the same time a romance and a crime story. It is a story of street gangs, racism, and violence in the shadows of rising skyscrapers. It will open on December 10.

Jason Reitman’s “Ghostbusters: Afterlife” is a direct sequel set 30 years after “Ghostbusters II”. It follows two children (Mckenna Grace and Finn Wolfhard) and their mother (Carrie Coon) who discover their link to the original gang. It also stars Bill Murray, Sigourney Weaver and Paul Rudd. It is slated to release on June 11.

DEATH ON THE NILE

Director Kenneth Branagh returns with a new Agatha Christie adaptation, after the commercially successful and star-studded 2017 release, “Murder On The Orient Express”. It is about a murder of passion aboard a cruise ship on the Nile. The film casts Gal Gadot, Branagh, Letitia Wright, Armie Hammer, Annette Bening, Sophie Okonedo, Tom Bateman, Emma Mackey, Dawn French, Rose Leslie, Jennifer Saunders, and Russell Brand, along with Indian actor Ali Fazal. It is slated to release on September 17.