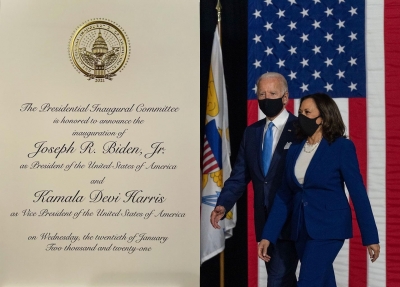 New York– Joseph Robinette Biden, Jr, becomes the American President after being elected as the last hope of his Democratic Party to lead and heal the nation tortured by the great ideological divide with his reconciliatory touch.

Thirty-two years after he first reached for the presidency, on Wednesday he will become President by default, a consensus candidate around whom the Democratic Party factions coalesced as the best bet to unseat President Donald Trump, perhaps for the very qualities, his air of uninspired stolidity, his moderation and his role as a Washington insider, that had held him back but now a winning contrast to Trump.

And the old stalwarts of the pre-populist Republican Party have also reluctantly backed him for these very characteristics.

When the Covid-19 pandemic struck in the middle of the Democratic Party process of selecting its candidate to oppose Trump, the rivals dropped out and rallied around him in what amounted to a nomination by acclamation.

When Bidene first ran for the party’s nomination in 1988, he said: “It is an exciting and dangerous time, for this generation of Americans has the opportunity so rarely granted to others by fate and history. We literally have the chance to shape the future.”

The opportunity that eluded him then, is now his, only the time is more dangerous, the pandemic, the economic crisis, racial and ideological distrust and months of violence on all sides capped by extremist supporters of Trump storming Congress.

It will call on his skills in being able to reach across to foes and rivals for a consensus.

An example of how he can put aside differences is him picking Kamala Harris to be his Vice President after she had viciously attacked him when she was a rival for the Democratic presidential nomination causing a drop in his support for a while.

As a member of the Senate Foreign Relations Committee, he had pushed for ending sanctions against India for its 1998 nuclear test and worked with Congressional non-proliferation hawks and sceptics across party lines to get the landmark India-US Civil Nuclear Agreement approved by Congress in 2008.

That recognised India as a nuclear in practical terms, effectively ending its international isolation over the tests.

Biden has been making conciliatory speeches since his election and said last week: “Unity is not some pie-in-the-sky dream. It’s a practical step to get any of the things we have to get done as a country, get done together.”

He not only has to reach out to the 46.8 per cent of the voters who backed outgoing President Donald Trump, but he also has to hold on to the strident left wing of his party.

Joe Biden, as he prefers to be known to fit his “everyman” persona, comes from modest circumstances.

His father who had once been well off slipped economically when he was laid off from his job in Pennsylvania, where Biden was born, and moved to Delaware to work as a used car salesman, initially facing economic difficulties.

In his acceptance speech at the Democratic Party Convention last year, he recalled his father telling the third-grader about the move: “I remember my dad coming up the stairs in my grandpop’s house where we were living, sitting at the end of my bed, and saying, ‘Joey, I’m going to have to leave for a while’.”

For a while, the family stayed with his grandparents as his father struggled to establish himself in Delaware and reunited with his family.

That experience is imprinted on his social and economic outlook.

Of his family’s working class heritage, he once said: “I’m the first Biden in a thousand generations to get a college and a graduate degree.”

He also worked as a truck driver to help pay his way through college.

A striver, he overcame a stuttering problem by reciting poetry to become a public speaker.

Biden turned 78 on November 20, 2020, and as the 46th President will be the oldest person to assume the American presidency.

He has been preparing for job through his 47 years in politics with ideological shifts and by building bridges and networks even as he faced political failures and tragedies in his personal life.

Biden served eight years as Vice President with former President Barack Obama, bringing the wisdom of experience and the practicality of getting things done in Congress and internationally while getting hands-on experience in the ways of the White House.

His political career began when he was elected as a young lawyer to the Newcastle County Council in 1970 and two years later he ran successfully for the Senate.

In the first run for the 1988 presidential nomination after 16 years on the Senate, Biden made several exaggerated or false claims during his campaign about his education and involvement in the civil rights movement and withdrew when they were exposed.

His father’s advice saw him through that and more stumbles on the way to the presidency: “My own father had always said the measure of a man wasn’t how many times or how hard he got knocked down, but how fast he got back up.”

Biden picked himself up and served 20 more years in the Senate, heading the Foreign Relations and Judiciary Committees.

In 2008, he lost the last presidential nomination bid to Obama, who invited him to be his Vice President.

He passed up on the 2016 election deferring to the Democratic Party establishment that backed Hillary Clinton. Less polarising than her, he could have been a stronger candidate against Trump.

In his run for the party nomination last year he suffered initial losses in the intra-party elections, ending up fifth in New Hampshire and fourth in Iowa, both considered bellwether states, and second in Nevada, nearly getting written off.

But he turned things around and scored victories.

At the personal level he suffered a tragedy in 2015 when his son and political heir apparent, Beau Biden, who had been elected the attorney general of Delaware, died of brain cancer.

Beau Biden, who had served in Iraq as an Army officer, was the survivor of another tragedy that struck the family in 1972 just as Joe Biden was about to start his Senate career as a 29-year-old.

Joe Biden’s first wife Neilla and their sons Beau, Hunter and daughter Amy were in an automobile accident.

Neilla and Amy died, while the sons were hospitalised with severe injuries.

Recalling his despair after the losses, Joe Biden wrote: “There were moments when the pain cut through like a shard of broken glass.”

As a widower, he married Jill Tracy Jacobs in 1977 and they have daughter Ashley Blazer, who is a social worker.

Jill Biden, who has a PhD, is an English professor at Northern Virginia Community College and will continue to work.

She helped him emerge out of the depths of sorrow after the family tragedy and has been politically involved and campaigned for him during the recent election.

His other son Hunter Biden was the catalyst for the first impeachment of Trump.

Removed from the Navy because of alleged drug use and having no experience in the energy sector or in Ukraine, he was appointed to the board of directors of a Ukrainian gas company with salary of about $50,000 per month.

A prosecutor looking into the company was fired at Joe Biden’s behest.

Trump was charged with misusing his office by withholding aid to Ukraine in order to get its government to investigate it. The Senate acquitted Trump.

Hunter Biden was in another controversy over a deal with a Chinese company to invest about $1.2 billion. He has since withdrawn from it.

He recently acknowledged that his tax matters were being investigated by the federal government.

Joe Biden suffered two brain aneurysms and underwent separate surgeries for them and also had a pulmonary embolism in 1988, putting him out of action for about half the year.

Biden’s family is mostly of Irish descent and he will be the second Catholic after John F. Kennedy, to become President in a nation where all the others have been Protestant Christians.

There may be an Indian connection in his lineage: He has spoken at least twice of having heard that an ancestor may have lived in Mumbai in the 18th century as an East India Company employee, but has not confirmed it.

After a bachelor’s degree from Delaware University, he received a law degree from Syracuse University in New York State and briefly practiced law privately and as a public defender, the lawyer for the poor.

He had several stumbles during his political career, but his views and policies have evolved.

Along with many right-wing and racist politicians he opposed the school desegregation plan known as busing that involved transporting children across de facto local racial lines of separation to schools in other areas to end racial exclusivity of schools.

During a Democratic Party presidential debate, Harris criticised him over this and pointed out that she was one of the Black children transported by bus to break down racial segregation.

Biden supported the Iraq War over false claims that it had weapons of mass destruction but said during the campaign he said that he had opposed from the beginning. He later admitted that he “misspoke”.

He has repeatedly defended his vote for the war, but also said it was a “mistake”.

Biden was one of the promoters of the controversial Crime Control Act which ended up disproportionately hurting African Americans and while it was being debated he talked of “predators” and young people “born out of wedlock, without parents, without supervision, without any structure, without any conscience developing” seen as a coded criticism of the community.

He later backtracked on the support for the law and has said during his campaign that was a mistake too.

Biden is gaffe-prone and his advisers and handlers keep him to scripted speeches and limit his media interactions. (IANS)