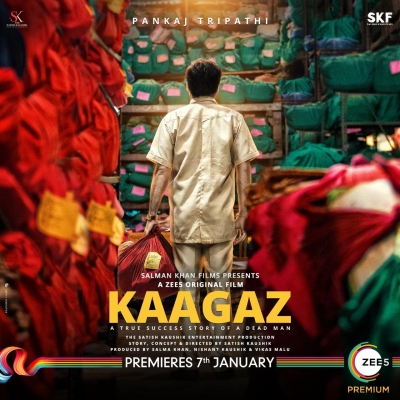 The merits of Pankaj Tripathi’s new outing are dwarfed by the cliches that the film fails to resist. It is something that prevents Kaagaz from living up to the potential its storyline had promised.

Tripathi, one of Bollywood’s most incredible success stories in recent years, continues with his glorious run as an actor in the OTT domain, this time returning with a starring role in Satish Kaushik’s new directorial. Among the film’s advantages is also the fact that the plot draws from an intriguing true story. The fact that writer-director Kaushik tries giving his tale of blatant corruption a satirical spin would only seem to add to its credence.

Yet, as the minutes roll and the narrative stuffs in everything from an item naach to a Shashikala-prototyped scheming chichi to a very filmi portrait of the bhrasht sarkari office, the film begins to lose its purpose.

Kaagaz starts failing early on in its effort to create an emotional tug over the protagonist’s plight, owing to its sheer lack of storytelling depth.

Tripathi plays the Lal Bihari, a bandwallah in a village. With workflow increasing, Lal Bihari decides to expand his business, and for this he decides to sell a plot of land he owns. Except that when he tries to, he realises that conniving relatives have usurped the land by legally proving he is dead.

When Lal Bihari tries to set things right, he discovers he must wage a full-on war with a system that is corrupt to the core. The narrative that follows is about his indefatigable struggle that lasts for years, to prove he is alive.

The theme of a rotten system bearing down upon a common man’s bid to assert his identity has been explored with far more assuredness in the past. Random recall would bring back Mazhar Kamran’s Mohandas, or Anant Mahadevan’s Gour Hari Dastaan. Kaagaz suffers from serious dearth of conviction in its storytelling, in comparison.

Pankaj Tripathi is adequate in the central role, but clearly that is not enough. You wonder which was a more difficult deal — the on-screen protagonist’s struggle to prove he is alive, or Tripathi’s effort to keep a dead narrative going.

Storytelling has always been a weak point about Satish Kaushik’s direction. Somehow, after confidently building up a narrative in the first half, Kaushik fails to sustain the momentum post interval (think Tere Naam, Hamara Dil Aapke Paas Hai, Mujhe Kucch Kehna Hai or Badhaai Ho Badhaai). In Kaagaz, like his more recent releases Gang Of Ghosts or Karzzz, the break point happens much before interval. Long before the first hour is over, the film struggles to hold attention. No surprises, Kaushik’s turn as Lal Bihari’s lawyer is far more effective than his filmmaking.

That is sad actually, for this could have been a relevant film. (IANS)