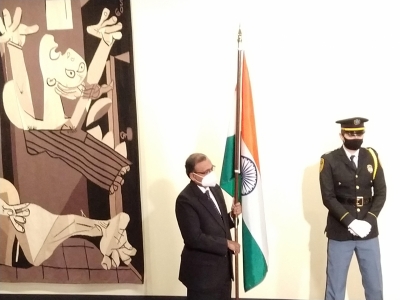 United Nations– With a pledge to “bring human-centric and inclusive solutions” to world problems, India has taken its place on the UN Security Council, the organisation’s highest decision-making body.

India’s membership was celebrated on Monday at a flag ceremony when its banner went up outside the Council chamber after the first session of the year.

Speaking at the ceremony, India’s Permanent Representative T.S. Tirumurti pledged that India would “not shy away from raising our voice against the common enemies of humanity like terrorism.”

“We will use our tenure to bring human-centric and inclusive solutions to matters of international peace and security. India will be a voice for the developing world,” he said.

At the Council, where China has repeatedly tried in recent years to bring up the Kashmir issue and questioning India’s integrity along with Pakistan, Tirumurti pointedly made a reference to the union territory and its unity with India.

“From Kashmir to Kanyakumari, we stand united as one, bound by our ethos of democracy, pluralism and commitment to fundamental rights,” he said, while pointing out that the nation with one-sixth the world’s population is the largest democracy.

Elected last June to its eighth two-year tenure on the Council with 184 of the 192 votes polled, India officially started on the Council on January 1, but today was the first session because of the holidays. The other newly-elected countries are, along with Ireland, Kenya, Mexico and Norway.

Kazhakstan’s Permanent Representative Magzhan Ilyassov, who presided over the flag ceremony, called the new members “sterling contributors” to the UN and said they are entering the Council at a crucial time for the world body.

The 15-member Council has ten non-permanent elected members and five permanent members, who have veto powers.

The year’s first session of the Council was held virtually before the flag ceremony and was on planning the agenda for the month during which Tunisia will hold the rotating presidency.

“Peace-keeping, peace-building, maritime security, women and youth, especially in conflict situations, and technology with a human face, will receive our attention while on the Council,” Tirumurti said.

“We look forward to our collective pursuit for an ideal where the World is One Family — ‘Vasudhaiva Kutumbakam’,” he said.

In the context of the global disruption by the Covid-19 pandemic, he quoted Swami Vivekananda: “Each nation must give, in order to live. When you give life, you will have life; when you receive, you must pay for it by giving to all others.”

While India serves on the Council as a non-permanent member, it will continue its quest for permanent seat in a reformed UN.