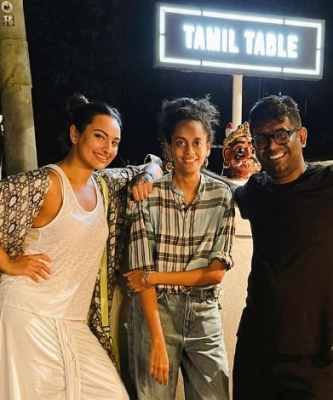 Mumbai–Actresses Huma Qureshi and Sonakshi Sinha were engaged in a fun banter online on Saturday.

Sonakshi posted photos from a restaurant in Goa, where she dropped by with a friend.

Huma noticed Sonakshi’s pigtail buns in the image, and commented on the Instagram post: “Did you copy my hairstyle… Chor.”

To which, Sonakshi replied: “Show copyright.”

Actor Gulshan Devaiah joined the conversation and wrote: “She’s been raving about you a lot lately.”

In another post — a video of her skipping – Sonakshi encouraged fans to take up the exercise as a workout. “No gym no problem! SKIP. (Not the workout),” she captioned it.

Sonakshi is currently gearing up for her next release, “Bhuj: The Pride Of India”, co-starring Ajay Devgn, Sanjay Dutt, Sharad Kelkar, Ammy Virk, Pranitha Subhash and Nora Fatehi. The film is set against the backdrop of the 1971 Indo-Pak war. (IANS)