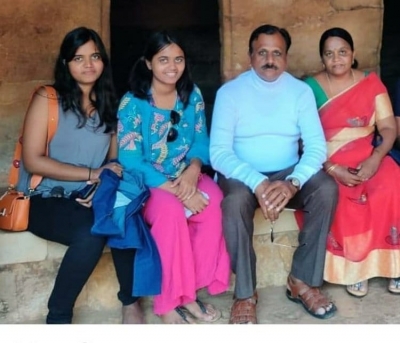 Madanapalle, Andhra Pradesh–Students and parents of the school in Andhra Pradesh’s Chittoor district where the mother, who murdered her two daughters along with their father, worked, are in a state of shock, disbelief and fear.

“All the people who heard about this incident are shocked,” a school teacher and colleague of V. Padmaja at the Masterminds IIT Talent School said on Thursday, when asked about the state of students and parents.

Padmaja’s colleagues, however, also praised her and said she is a very good person in normal times.

“Madam is a very good person. She always used to motivate us. Something happened to them… normally they are not that kind of people. Our opinion is that somebody could have done something to them,” said Shoba, a teacher in the school for the past 12 years.

Expressing disbelief over the happenings, her colleagues reiterated about that both Padamaja and her husband, V. Purushotam Naidu, a lecturer at a government women’s college, are good people and they have no clue as to who pushed them to such a state.

“They loved their children so much. When children were at home, madam used to come only once a week and spend most of the time with children,” said another teacher.

However, police believe that they had stopped the parents from killing themselves as well by reaching there in time.

“The couple are extremely devout with belief in afterlife. When we spoke to them, they admitted that they have killed their children but said that their children will return,” a police official leading the investigation in the case said.

When the police reached the spot, the couple asked them to leave that day, assuring them they will produce the children the next day.

According to police, the couple claimed that they only killed an illness called ‘kali’ in their children.

At the scene of offence, a brass tumbler was seen shoved into the mouth of one daughter and ‘nava dhanyalu’ (nine varieties of grains) sprinkled into her mouth.

In Telugu culture, ‘nava dhanyalu’ are sprinkled during house warming and other functions, symbolizing auspiciousness.

The police officer said that the daughters were mostly bludgeoned on the head and one girl’s head was even pierced with a spear-like weapon.

During the interrogation, the couple said that after their daughters walked their dogs one day, some abnormality developed in them.

Padmaja also told police that she was a follower of Mehr Baba and her husband of the Shirdi Sai Baba.

During investigation and arrest, Padmaja behaved eccentrically and even smiled sometimes. “I am Shiva,” she even said once.

The couple’s elder daughter Alekhya (27) had completed a diploma in forest studies from Bhopal, while younger daughter Sai Divya (22) studied BBA. Divya was also a student at the A.R. Rahman Music School in Chennai.

According to the police, the parents as well as the daughters were devotional to the extent that they thought God will save them come what may.

Most of the neighbours are still in disbelief and reminisced how exemplary the family was in happier times. (IANS)