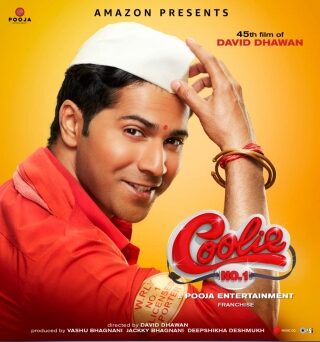 The joke’s on all of them really, you realise as the muddled mess plays out. Varun Dhawan tries to do a Govinda — and a Mithun and a Bachchan and a Nana for good measure. Sara Ali Khan hits frantic mode with pelvic thrusts, she was out to prove she can be darling of the masses, too. David Dhawan comes out of some sort of a time warp thinking this is 1995.

Well, Varun better stick to doing a Varun — that’s the way his fans like him. And Sara doesn’t look cool with the coolie. The gyration gig is simply not for her, she can give the pelvis some rest. On Dhawan senior, someone tell him what year this is.

In itself, the first Coolie No. 1 was no great comedy — not even by David Dhawan’s loony yardstick. But at least the film had the singular asset that made it stand out — Govinda. You shouldn’t get into such ditsy misadventure in the name of comedy filmmaking unless you have Govinda to justify the chaos.

The big problem about the recreated Coolie No. 1 is not that it is utterly brainless (the 1995 original was no intelligent entertainment either). The problem with the remake is it fails to hold your attention from almost the time it gets going. Boring and brainless can be a lethal combo for a ‘comedy’.

Owing to any obvious intent to narrate anything original, the cast is a one-on-one array of substitutes. So if Varun does a Govinda and Sara takes over the naach-gaana duty from Karisma Kapoor, Paresh Rawal steps into Kadar Khan’s shoes as the heroine’s father, Shikha Talsania (what a waste) tries fitting in as the heroine’s sister as Kanchan did in the old film. Rajpal Yadav does his own version of the heroine’s mama, which Shakti Kapoor played in the original. There’s Sahil Vaid for Harish as the hero’s buddy, and Javed Jaffrey for Sadashiv Amrapurkar as the matchmaker pandit ji. None of them manage to emerge from the shadows of the original’s cast, as the jaded rehash plays out.

Okay, not all of it is a rehash. Govinda was a coolie wearing a blue shirt at a bus terminus. Varun is a coolie in a red shirt at a railway station. Some originality, right?!

You know the story, they have hardly updated it. Screen writer Rumi Jafry re-hauls the storyline of the 1995 original almost in entirety. David Dhawan calls the shots on a familiar chain of events as attempted slapstick, overdone mimicry, some melodrama and the mandatory fight scenes unfold.

It’s all about deja vu as rich businessman Rosario (Paresh Rawal) insults pandit Jai Kishen (Javed Jaffrey) over a matchmaking deal for his daughter Sara (Sara Ali Khan). The livid pandit picks up Raju the coolie (Varun Dhawan) from the station, packages him as a millionaire and presents him before Rosario as a loaded, prospective groom. Raju and Sara fall for each other before you can spell l-o-v-e, and Rosario happily marries off his daughter to the ‘super rich’ Raju.

At a convenient point in the narrative, Rosario discovers Raju’s reality, so the guy invents a twin. Almost everything that follows is a blind repeat of the 1995 screenplay.

As all of 134 minutes play out, you would frequently find asking yourself — why was this film made in the first case? There is no evident effort to cater to contemporary tastes. Whatever is rehashed fails to regale because what seemed funny in 1995 is not cool enough two and a half decades later.

Amusing, how you tend to subconsciously recall Govinda in specific scenes as Varun tries repeating random antics. That can surely be the biggest failure for a remake. (IANS)