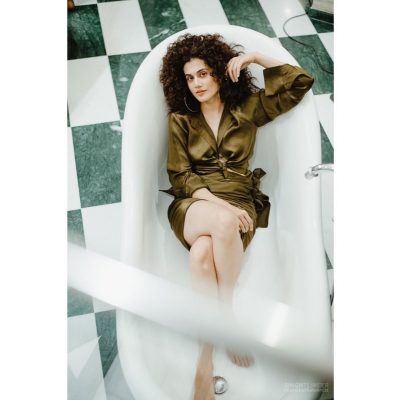 Taapsee is nostalgic as she draws the curtains on ‘Rashmi Rocket’

Mumbai– Actress Taapsee Pannu has completed the shoot of her upcoming film Rashmi Rocket. On Tuesday, she posted a nostalgic note recalling the hectic and eventful shooting stint for the film.

“Not sure if I have the time and space to explain how this film actually happened. From the basic storyline I heard in Chennai 3 years back to actually complete its filming against all odds in these challenging times. This was one hell of a driven team effort!” she wrote on Instagram.

“I’m going to reserve the details for later coz I’m sure we have many more battles to fight till the release but what I can say is this is one team that’s gonna do it all with a smile and most effortlessly coz the captain of this ship @akvarious believes in working strictly in between chilling with bunch of friends on set, instead of the other way round,” she continued.

“For now drawing the curtains on #RashmiRocket and moving onwards n upwards coz this Rocket has left us sky bound! #FilmWrap #RashmiRocket,” concluded Taapsee.

In the Akarsh Khurana directorial, she will be seen as a runner from the Rann of Kutch who faces struggles during her journey of becoming an athlete.

Rahul Sharma: Wanted to do web series but was only getting ‘bold’ scripts

Mumbai– Actor Rahul Sharma says he was always keen on exploring OTT as a medium, but the fixation of makers to serve bold content didn’t give him a chance to do so.

“I wanted to do a web series for a long time but I couldn’t because whatever offers came, they were just talking about bold scenes and asking me if I am comfortable with them. Like, that was their main concept!” says Rahul, who has joined the cast of the web series, “Hello Ji”.

About his new project, he continued: “In this particular web series, they tried not to do any such kind of things and just kept it in a very real space. Each character, whatever they are doing, does so within the demand of the script. For the very first time, I am kissing on screen,” he says.

The actor has played a small role in the web series Maya 3, as well. “In Maya 3, I played a small cameo and right now what I am doing is proper lead. Technically, I can say this is my launch on the web as for the very first,” he says.

Kangana: Indians supporting farmers’ protests are ‘terrorists’, should be jailed

Mumbai– Actress Kangana Ranaut on Tuesday said all Indians who were supporting the ongoing farmers protest are terrorists.

“Six brands cancelled contracts with me some were already signed some were closing n said I called Farmer terrorists so they can’t have me as an ambassador. Today I want to say each and every Indian who is supporting these riots is also a terrorist including anti national brands,” Kangana Ranaut tweeted on Republic Day.

“Sick and tired of riots and blood bath almost every month , Delhi, Bangalore and now again Delhi #RedFort,” the actress wrote in a separate tweet.

The actress also shared a video speaking in Hindi, where she said: “We have become a joke before the world today. We have no prestige left. We don’t care if the Prime Minister of another nation is our guest, we can sit naked in front of them. If this goes on, there will be no progress in this country. Whoever supports this so-called farmers’ protest should be jailed. They have reduced our nation, its government and Supreme Court into a joke.”

Mumbai– Actress Kriti Sanon is making the most of her Republic Day holiday on Tuesday.

She took out time to enjoy some time out in the sun.

The actor uploaded images on Instagram where she is seen chilling out with producer Sajid Nadiadwala, his wife Wardha Nadiadwala, and Kriti’s make-up stylist Aasif Ahmed and Adrian Jacobs.

“Lie down in the grass and soak in the Sun kinda day,” she captioned the image.

The actor is currently shooting for Nadiadwala’s new production, the Akshay Kumar-starrer Bachchan Pandey. The film is being directed by Farhad Samji and is set to release on 26 Jan 2022.