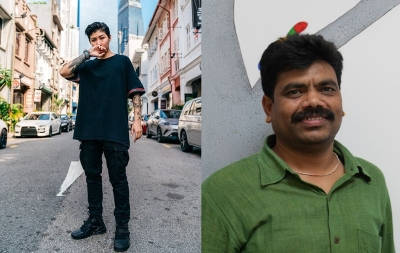 New Delhi– Putting at its centre respect for the environment and passion for cross-cultural oneness, one of Singapore’s tallest murals – the recently-unveiled ‘Dancing in Unison’ – borrows from the iconic imagery of both India’s Gond art and Singapore’s contemporary art.

“The brief was to create a piece that’s healing, combining both our belief systems with a mindful approach. The whole process took place with the helpful guidance of Giulia Ambrogi of St+art India through multiple zoom calls, WhatsApp chats, and sketches back and forth through email.

“Art is a reflection of the artist’s culture, and through collaborations like these we learn more about other cultures and world views. This opens us up to the bigger picture, alternative views and shows us there’s more to life than what we are usually exposed to,” Sam Lo told IANSlife. Lo is a self-taught Singapore-based visual artist, who has painted a mural in Lodhi Art District and was part of the artsy makeover of Arjangarh metro station in New Delhi.

“The internet has made the world a lot smaller, and a lot more accessible. Art has the power to showcase cultures in a way where there’s potential for dialogue and engagement. It helps connect people from different parts of the world. Regardless of a difference in cultures and languages, art gives us the ability to see and recognise and understand the other,” Bhajju Shyam told IANSlife. Shyam is one of the primary living exponents of Gond art. He was born and raised in the village of Patangarh, Madhya Pradesh, which is known to be the home of the Gond Pradhan indigenous tribe. He was awarded a Padma Shri in 2018, the fourth highest civilian award given by the Republic of India.

He added that he had not seen Sam’s work before but realised that both their works were housed in the Lodhi Art district where they also had birds as a primary element in their work. “I realised our styles were different, but how we viewed the world had similarities.”

Every feature in the work extends on this idea of the necessary dance between our urban living and nature. The tree – an iconic element from Gond art designed by Bhajju — engulfs the urban environment of human dwelling (personified by the windows of the building) becomes a metaphor for the universe where everything is interconnected from the land to the air. Its branches host vibrantly coloured sparrows, an element which reoccurs in Sam’s work, as a symbol of freedom, being one of the most common birds in India and Singapore.

Sam’s deer, a revered animal in India serves as a tribute to Gond art, manifests the contemporary interconnection where elements from different cultures are seen blending together in our globalised and accessible world. Sam further reinforces this idea by designing a red ribbon, another common element in their work, as a reminder of an omnipresent energy that connects us all, and one which connects her beliefs with those of Gond Art.

The mural bears the fruits of many months of planning where both the artists have virtually connected to create this composition. Due to Covid-19 restrictions, it has been painted solely by Sam Lo, said Singapore Tourism Board.

The mural on the 7-storey Broadway Hotel in Little India was unveiled as part of the ongoing Singapore Art Week. (IANS)