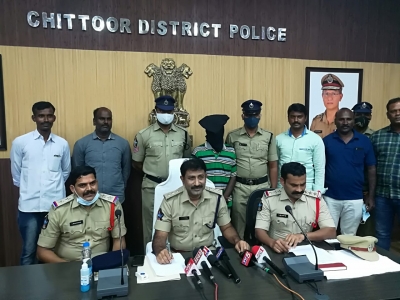 Following the death of her husband, the woman was living alone in a cow shed in Kotha Gollapalli village in Tavanampalli mandal.

According to the district police, one S. Thamu complained to them about the crime, prompting the police to register a case under Indian Penal Code (IPC) Sections 302 and 380.

“On probing about unruly individuals and people with a history of police cases in Gollapalli village, we stumbled upon Sudhakar,” said an official.

Incidentally, Sudhakar was missing from the village from the day the crime came to light and his phone was also switched off. Following a manhunt for the suspect, the police found him at the Modhulapalli bus stop.

“On interrogation, Sudhakar admitted that he attempted to rape the old woman in the wee hours of Tuesday at around 1 a.m.,” the official said.

The accused first tried to rape the woman by gagging her. However, as she raised an alarm, Sudhakar first strangled her to death and then indulged in necrophilia.

Following the crime, he stole the two gold ear studs weighing 6 gm from the woman and decamped to his home.

On Tuesday morning, when he woke up, he realised that the whole village was abuzz with the news of the crime, prompting a terrified Sudhakar to leave the studs at home and flee to Tirupati.

He returned again on Friday to the Modhulapally bus stop to check about the prevailing atmosphere in his village when the police arrested him. (IANS)