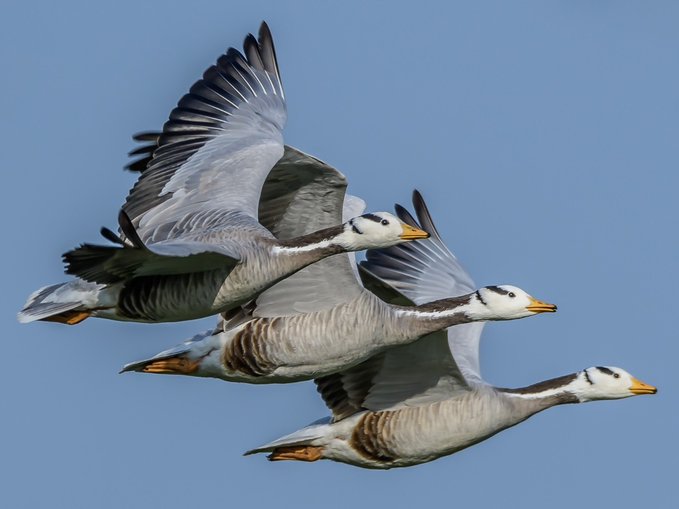 Pong Dam, Himachal Pradesh–Biologists on Saturday sounded the alarm with over 1,000 migratory birds, largely the endangered bar-headed goose, a highest-altitude migrant, were found dead over the past one week or so in Pong wetlands — one of the largest in northern India in Himachal Pradesh.

Chief Conservator Wildlife (Pong wetlands) Upasna Patyal told IANS the reason for the deaths is still a mystery as their carcasses have been sent to different laboratories to determine their cause of death, but it could take days or at least a week to get results.

The number of deaths was now more than 1,000. Besides the bar-headed goose, the other species were the shoveler, the river tern, the black-headed gull and the common teal.

Some birds — including the bar-headed goose — were seen acting strangely before their deaths, she said.

“When you’re seeing that birds are not able to take the flight despite healthy wings, it’s really disturbing. At some distance, you find their carcasses,” she said.

The bird carcasses were sent to the Indian Veterinary Research Institute in Bareilly, the Regional Disease Diagnostic Laboratory in Jalandhar and the Wildlife Institute of India in Dehradun to know their cause of death.

“We are getting reports of death of birds in nature across India. It’s likely to be a disease because the deaths are occurring in multiple locations involving multiple species. It is a dangerous situation and needs multi-stakeholder intervention on priority,” he warned.

“It is wrong to blame temperature intolerance for the death of birds in Pong and as reported earlier in Indore (in Madhya Pradesh) and in Jhalawar (in Rajasthan). Temperature can’t be an issue. The death at different locations is a matter of serious concern as India lacks rapid response to wildlife emergencies,” explained Sundar, who is the IUCN Co-chair of the Stork, Ibis and Spoonbill Specialist Group.

At the Pong wetlands, preliminary findings of their postmortem have ruled out poisoning as the cause of their death, wildlife official said.

An official report said the field staff reported the sudden death of four bar-headed geese and one common teal in Fatehpur area of Pong on December 28.

The next day, the field staff was ordered to carry out a search of the entire area of the sanctuary and 421 birds were found dead in the wildlife range of Dhameta and Guglara areas of the Nagrota range.

Forest Minister Rakesh Pathania said the Wildlife Wing has initiated a probe into the deaths of the migratory birds.

After receiving the reports of the samples sent to different institutions, strict action will be taken against those found guilty, he added.

According to the Bombay Natural History Society (BNHS), the Pong wetlands are the one wintering grounds in the globe to hold such a large congregation of bar-headed geese.

Chief Conservator Wildlife Upasna Patyal said as per the census conducted in Pong on December 15, around 57,000 migratory birds were recorded. The most prominent among them was the bar-headed goose, a rare winter migrant in other Indian wetlands.

Besides the bar-headed goose, the other noticeable species were the northern pintail, the common pochard, the Eurasian coot, the common teal, the great cormorant, the Eurasian wigeon, the gadwall and the graylag goose.

With the onset of winter, thousands of migratory birds from central and northern Asia start arriving for their annual sojourn.

Built in 1976, the reservoir is the only place in India after the Bharatpur sanctuary in Rajasthan where the red-necked grebe descends every year.

The influx of birds can be seen at swamps near Nagrota Suriyan, Budladha and Sansarpur Terrace.

The Pong wetlands occupy an area of at least 18,000 hectares and extend up to 30,000 hectares in the peak monsoon season. An area of about 20,000 hectares within a radius of 5 km has been notified as a buffer zone dedicated to wildlife. (IANS)