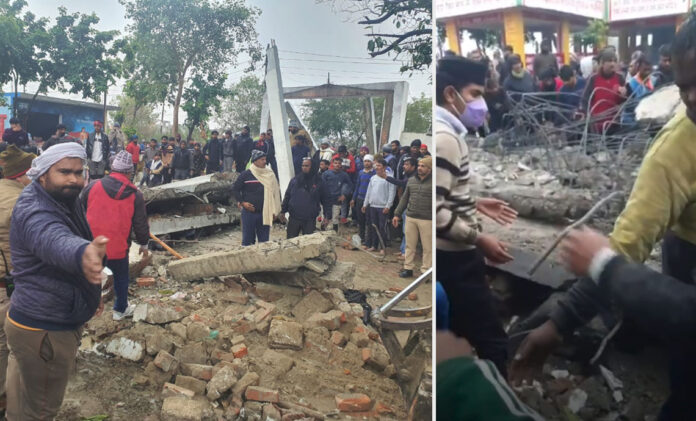 Ghaziabad– At least 25 people were killed and 20 others were injured as the roof of a structure in a cemetery in Muradnagar area here collapsed while they were sheltering under it amid heavy rains after attending a funeral on Sunday, officials said.

The incident was reported in the morning when around 50 people, who came for the last rites of a fruit-seller, took shelter under the roof of a recently-built corridor to save themselves from getting drenched. However, minutes later, the roof of the structure collapsed.

Teams of the National Disaster Response Force (NDRF) were called to join the police and district administration for the operation to rescue those trapped under the debris as well as extricate the bodies of the deceased victims.

Ghaziabad Superintendent of Police Abhishek Verma said that of the 20 injured, eight are in a critical condition and are being treated in different hospitals.

“The corridor was almost 25 feet long and prima facie it seems it came down because of the heavy downpour,” Verma said.

Police have lodged an FIR against the contractor and officials of the Municipal Corporation of Muradnagar under various sections of the Indian Penal Code (IPC), officials told IANS.

After the directions from Uttar Pradesh Chief Minister Yogi Adityanath, an investigation into the matter, under the supervision of Meerut Divisional Commissioner and Inspector General of Police is underway. The officials of Ghaziabad Municipal Corporation (GMC) and Ghaziabad Development Authority (GDA) are also assisting them.

IANS has sourced a copy of the work order from the Muradnagar Municipal Corporation issued to Tyagi for the construction of the structure that collapsed. The work order, issued on February 4, mentioned the structure as beautification work of the crematorium.

While the deadline to finish the construction stated in the order was 60 days from the date of commission of the contract, Muradnagar MLA Ajit Tyagi said that it was completed just a couple of months ago.

“The waiting area was built only a couple of months back. It is a big question on the quality of the material used in the construction as a single downpour washed away the whole structure. Those guilty of laxity would not be spared,” he said.

The locals present on the spot also raised concerns over the material used in the construction. They said the rubble showed that very little cement was used in construction.

The state government has announced an ex-gratia sum of Rs 2 lakh each to the kin of the deceased and Rs 50,000 to people injured in the incident. Prime Minister Narendra Modi and President Ram Nath Kovind also expressed grief about the incident. (IANS)