Mask-wearing in the United States has gradually increased over time while distancing measures have dramatically fallen, according to a study that has continuously tracked the virus-related personal behaviors of thousands of people since April. The findings suggest a link between the current U.S. surge in coronavirus infections and relaxed attitudes about staying away from others.

The latest survey of all 50 states and the District of Columbia, by researchers from Northeastern, Harvard, Northwestern, and Rutgers universities, found that other practices such as washing hands, disinfecting surfaces, and avoiding crowded places also reached all-time lows in October.

The one important exception was mask-wearing, the study found. The practice steadily increased through the end of August, and has held steady since then, with about 77 percent of people reporting that they very closely adhered to recommendations to wear masks in November. 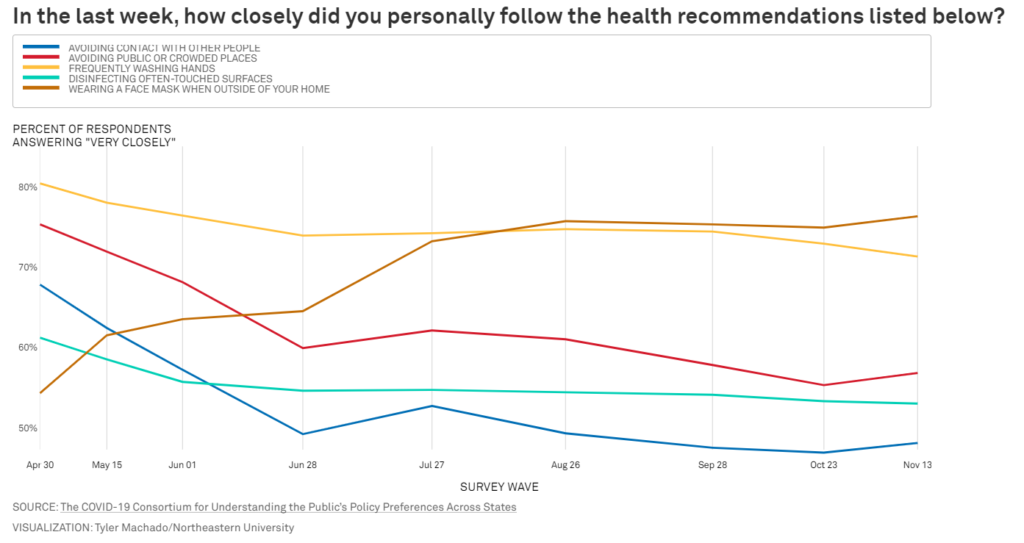 The discrepancy may be explained by strong public messaging supporting facial coverings as an effective way to limit the spread of SARS-CoV-2, the coronavirus that causes COVID-19. David Lazer is a University Distinguished Professor of political science and computer sciences with joint appointments in the College of Social Sciences and Humanities and the Khoury College of Computer Sciences at Northeastern. Photo by Adam Glanzman/Northeastern University

People may also be picking and choosing depending on which method is seen as less burdensome, says David Lazer, university distinguished professor of political science and computer and information sciences at Northeastern, and one of the researchers who conducted the online study.

“Wearing a mask is, relatively speaking, really not that burdensome given the array of things that people have out there to limit the risk,” he says.

The key behavior that drives the spread of COVID-19 is close proximity to other people, the study points out. Large indoor gatherings may trigger super-spreader events, where a single contagious individual may infect multiple people at once.

Researchers noted a general upward trend in people going out to restaurants and gyms since April. The number of respondents who said they were in a room with others who were not members of the same household in the preceding 24 hours jumped from 26 percent in April to 45 percent in October.

In the same time span, the number of large group activities—with between 11 and 100 other people, rising from 2.4 percent of respondents in April to 6.4 percent in October.

“The Dakotas, Wyoming, Idaho, and Montana are all a lot more relaxed in terms of social distancing than, say, New England,” Lazer says.

In contrast, New Zealand, Taiwan, and other countries have shown that temporary changes in behavior and consistent precautions, such as effective testing, contact tracing, and isolation, can slow the transmission of COVID-19, allowing local economies to remain open and social activities to approach normalcy, the survey says.

“These successes demonstrate that coordinated action to change behavior can control the pandemic,” it adds.

Among regions and even among age groups, behaviors varied widely.

U.S. respondents 65 and older were much more likely to keep their distance from others and cover their noses and mouths with a mask by wide margins over those 18-24 years old.

“Age is an interesting exception, because younger people tend to be more Democratic,” the study says.

Young Republicans 18-24 years old were far less likely to stay spaced apart from others compared to their Democratic peers. That trend continues even as Republicans get older, though narrows once they get past 45 years of age, according to the survey.

“Part of the puzzle going forward is that there is a lot more room for Republicans, especially younger Republicans, to improve social distancing than Democrats, and that public health messaging has to be adapted accordingly,” he adds.