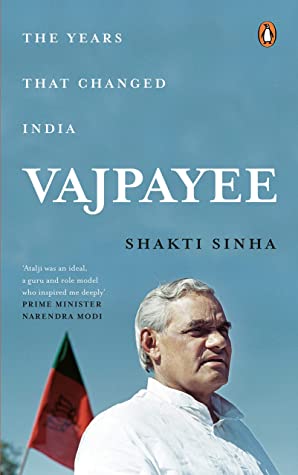 New Delhi–At a time when inter-faith marriages have come under pressure and Uttar Pradesh has even promulgated an anti-conversion ordinance, a new book contends that former Prime Minister Atal Bihari Vajpayee was vehemently opposed to discrimination based on faith and that religious conversions deeply offended his sensibilities – but he accepted them.

“Unlike Gandhi, who had detailed exposure of living in a non-Hindu milieu and extensive conversations with Christian theologians, Vajpayee was very much rooted in the larger Hindu traditions. Hence, for him, discrimination based on faith was completely no-go, and the ruler was not to be concerned with the belief systems of his subjects. This worked fine conceptually when boundaries between faiths are fluid and faith is not seen as all-pervasive,” Shakti Sinha, who had worked closely with the former Prime Minister for three-and-a-half years from 1996-99, writes in “Vajpayee: The Years that Changed India” that the publisher, Penguin, is set to release on December 25, his 96th birth anniversary.

But, asks Sinha, can belief systems be equated with religion? Can Shaivism, Vaishnavism, Nath Sampradaya or even Kabir Panthism be categorised as separate religions? Going further, do marriages take place between Jains and non-Jains?

“Vajpayee strongly argued for Vijayadashami to be a national event since it symbolised the victory of good over evil and was, in his eyes, was non-sectarian. The same logic would apply to Holi and Diwali too,” the author states.

These assumptions would obviously not be acceptable to most believers of Abrahamic religions, the author states, pointing out that while moving the confidence vote on May 27, 1996 (during his 13-day first term), Vajpayee “had said that India was inherently secular, since Indians did not believe that any faith or system of worship had a monopoly over truth. This, for Vajpayee, was self-evident”.

Syed Shahabuddin, the diplomat turned politician and a prominent voice articulating a Muslim point of view, disagreed with Vajpayee’s description of the Indian philosophy. According to Shahabuddin, it was his belief as a Muslim that his was the only true path. So could Vajpayee say that Indians accept all faiths as true and equally valid?

“I showed Shahabuddin’s letter to Vajpayee and asked him if a reply had to be sent. He read the letter carefully and gave it back to me. His body language suggested that no action was necessary. It was early days and our comfort levels were not too high, so I did not ask him anything. I would hazard that Shahabuddin’s logic would not have appealed to him. Nor would he have really understood why many would see Vijayadashami as sectarian and not a national event,” Sinha writes.

Religious conversions, Sinha says, “deeply offended Vajpayee’s sensibilities. He saw it almost as a humiliation, a continuation of foreign rule, with the weaknesses of Indians being exploited. It wasn’t that he was not aware of social evils within Hindu society. In fact, when the former sarsanghchalak of the RSS, Balasaheb Deoras, passed away, Vajpayee quoted him as saying that if untouchability was not a sin, then nothing was a sin”.

“This distaste with conversions did not make him communal or discriminatory against those belonging to other religions. In fact, he was very sympathetic to the converted, accepting in his mind that it was economic or social desperation that led to conversions,” Sinha writes.

He also notes that “it was not that Vajpayee was ambiguous about what he stood for; rather, he was not an ideologue, which meant his world view was not rigid or dogmatic”.

“The context was always a factor, whether it meant dissolving the Jana Sangh in the larger corporate identity of the Janata Party to rescue democracy, or making Gandhian socialism the slogan of the newly formed Bharatiya Janata Party, in order to distinguish it from the Jana Sangh and widen its appeal.

“It also meant temporarily shelving three controversial issues – abrogation of Article 370; establishment of the uniform civil code; and the Ram Janmabhoomi – when the National Agenda for Governance was negotiated in 1998, so that several non-Congress parties could come together on the common platform of the NDA. In fact, when he was taunted during the 1998 confidence vote for having dropped these issues from the NAG, Vajpayee said that this was done because the BJP did not have a majority. He never disowned these fundamental issues. He laughed away the Opposition’s charge by saying that they seemed upset that the BJP did not include these issues in the NAG,” Sinha writes.

“The trouble,” the author states, “was not in Vajpayee’s world view but in what the observer wanted to see in him. Many who saw him as communal, as a polariser and a cover for saffronisation when he was in power, changed their view by 2014 – when the Modi government came to power-and began to regard Vajpayee as a genuine ‘liberal’, a person who was accommodative and carried people with him. To quote Cassius from Julius Caesar, ‘The fault, dear Brutus, is not in our stars, but in ourselves’,” Sinha writes.

At the bottom line, the book notes, Vajpayee was an understated and a singular politician of the kind rarely seen in contemporary times. His patriotism was uncompromising, forged out of the paradoxes of his life: the sensitive poet who summoned nerves of steel to conduct the Pokhran-II nuclear tests; the man from humble beginnings who envisioned a project as titanic as the Golden Quadrilateral highway network.

Devoid of any political pedigree or patronage, he harnessed his diplomatic acumen to transform India’s relations with the United States, which had long been mired in misunderstandings rooted in the Cold War. His calculated decisions led to key strategic and economic policy achievements.

To this end, the book helps the reader understand Vajpayee as a decision-maker. The narrative focuses on the political challenges Vajpayee faced, and on his key initiatives in the strategic and economic fields which have had a lasting impact. The book fleshes out not only Vajpayee’s political philosophy but also provides an insider’s account of how he thought and worked.

Sinha has previously served as the director of the Nehru Memorial Museum and Library. He is a distinguished fellow at the India Foundation and is currently the honorary director of the Atal Bihari Vajpayee Institute of Policy Research and International Studies, MS University, Vadodara. (IANS)