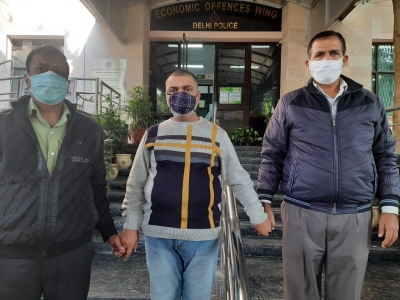 The complainant, an Income Tax officer, had alleged that during the period from November 9 to December 30, 2016, a large amount of cash (approx Rs 9 crore) was deposited in different bank accounts. On enquiry from the banks concerned, it emerged that the account holders were all carrying out their business activities from the same premises in Vishwas Nagar, in Delhi’s Shahdara area.

“During the course of investigation, it was revealed that the accused persons opened bank accounts in the names of fictitious identities on the basis of fake/forged documents. Thereafter during demonetisation, they deposited huge amounts of cash in it and misappropriated the same,” Joint Commissioner of Police, EOW, O.P. Mishra, said.

On the basis of the photographs available in the KYC documents, one of the occupants was identified as Gaurav Singhal, 35. In his statement to the IT Department, he admitted to having got prepared fake IDs like voter cards and Pan cards for opening various bank accounts in which large amounts of cash were deposited during the period of demonetisation.

Singhal was arrested on Thursday from a paying guest accommodation situated in the Naveen Shahdara area. (IANS)