Anil Kapoor: Being loved for what you love doing is greatest feeling

Mumbai– Bollywood actor Anil Kapoor is happy with the response he is getting for his performance in the new digital film, AK vs AK.

“Being loved for what you love doing is the greatest feeling ever! I am here because of the fans and their undying support without them we are nothing. And the appreciation AKvsAK is getting is so inspiring, I can’t even describe it,” said Kapoor, who celebrated his 64th birthday on Thursday.

The film stars Anurag Kashyap along with Kapoor and also has cameos of the actor’s children, Sonam and Harshvardhan Kapoor, and brother Boney Kapoor. The cast members play themselves, although the film is a work of fiction.

The film directed by Vikramaditya Motwane had an OTT release on December 24. 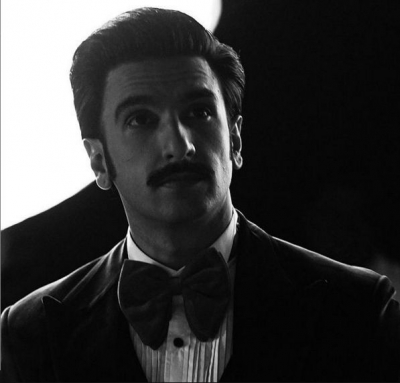 In the black and white image Ranveer shared on Instagram, he looks dapper in a classic suit and bow tie. He also sports a thick moustache. He chose a man emoji for caption.

Deepika went on the comment section and asked: “Channeling your inner Charlie!?”

One wonders if the bow tie and black suit reminded Deepika of the great Charlie Chaplin.

Cirkus is set to go on floors next month and will be shot in Mumbai, Ooty, and Goa. The film, produced and directed by Rohit Shetty, is set to release in the winter of 2021.

Shakespeare’s play has already been adapted in Bollywood by Gulzar as Angoor (1982), starring Sanjeev Kumar and Deven Verma, and the Bimal Roy-produced Do Dooni Chaar (1968), starring Kishore Kumar and Asit Sen.

Mumbai– Actress Taapsee Pannu has wrapped up the Ranchi schedule of the upcoming sports film Rashmi Rocket. She shared a picture along with her crew on Thursday.

“It was literally a war we were fighting. Everyday , every minute , against time against my physical limitations, against covid and against THE injury I contracted. These were my frontline soldiers in this war,” Taapsee wrote as caption.

She then thanked those who helped her transform into her character of an athlete.

“@sujeetkargutkar for taking on a gym novice like me and made sure we could achieve a body we can use as a sketch in a muscle anatomy class soon. @sportsphysio_prachi25 for being more confident than I was after my injury that I can bounce back and be even better and stronger than I was ever before.”

“@munmun.ganeriwal who never really made me hate what I was eating everyday because food is much more than just a fuel for the sardarni in me. @crastomelwyn sir for being ever so encouraging from day 1 . I have a feeling he has secretly gone n enrolled me in an athletic tournament already… you made me feel like I’m actually an athlete!”

“Thank you for being instrumental in this transformation that will be remembered for life ,not just by me.#RashmiRocket #MySoldiers.”

Earlier on Wednesday night, Taapsee posted a monochrome picture of the film on Instagram.

Hrithik watched the film with former wife Sussanne Khan and their children Hrehaan and Hridhaan. The actor shared a string of pictures from the theatre and a few stills of Wonder Woman 1984.

“Just watched WONDER WOMAN. Exhilarating experience. My childhood crush (WW) and my first love(movies) together with the BIG cinema IMAX experience! Doesn’t get any better than this. Thank you @gal_gadot for being the perfect WONDER WOMAN. And congratulations to the entire team,” Hrithik wrote as caption.

The film is a sequel to the 2017 hit Wonder Woman, with Gal Gadot reprising the titular superhero and her alter ego Diana Prince.

Akshay Oberoi: Work I do today is largely because of my first film

Mumbai– Actor Akshay Oberoi has looked back at his debut film Isi Life Mein…!, which released a decade ago on this day. He says the work he is doing today is largely because of his first film.

“My whole life I had dreamt about being on a film set. I always wanted to act, and there I was doing what I loved. There were a lot of young people and so there was young energy on that film. I have the fondest memories of that time. I found my voice then,” said Akshay.

After his debut film, Akshay went on to star in films such as “Pizza”, “Gurgaon” and “Kaalakaandi”. He has also made a name for himself in the digital space, with web projects like “The Test Case”, “Hum Tum And Them” and “Flesh”.

“The work I do today is largely because of my first film. I wouldn’t have been able to do diverse roles if it were not for that film. It defined me and made me who I am,” he said.

He is now awaiting the streaming of his web series “Inside Edge” Season 3.(IANS)