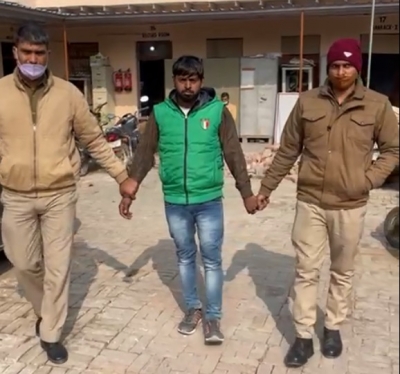 New Delhi– In a sensational case of murder and disposal of the body, a man murdered his friend after he failed to pay back borrowed money and later tied his body to a scooty and roamed around to find a place to dump the body in Prem Nagar in Rohini. The incident was caught on CCTV.

The Delhi police received a PCR call on Tuesday that a body had been dumped in a sack from which blood was oozing in Prem Nagar. The police reached the spot and the body was sent to the mortuary. A case of murder was registered and a probe launched.

The CCTVs installed in the vicinity were examined and eventually one person, riding on a blue scooty with a gunny sack tied to it, was spotted in the CCTV footage. Strenuous efforts were made to develop this lead and finally the rider of the scooty was identified as Ankit, a resident of Abrahm Nagar, Prem Nagar-III. The accused was nabbed from his house and the scooty used in the crime was recovered at his instance.

During sustained interrogation, the accused Ankit, a tailor by profession, disclosed that he had lent Rs 77,000 to the deceased during the lockdown, on a promise to return the money in a stipulated time period.

However, the deceased was unable to return the amount and sought some more time from Ankit. This infuriated Ankit who wanted to purchase a motorcycle. He flatly refused to give any more time to his friend for returning the money and called him to his rented accommodation.

“A heated argument ensued between them and Ankit banged his friend’s head against the wall due to which Ravi (deceased) lost consciousness and blood started to flow from his head. After that, he strangulated Ravi with a plastic cable,” said PK Mishra, DCP Rohini.

Thereafter, he tied Ravi’s mouth, hands and legs with plastic cable, plastic twine and tape and put the body in a gunny bag. To dispose off the corpse he tied the gunny bag on to the scooty and went round the city to dump it at an isolated place. (IANS)