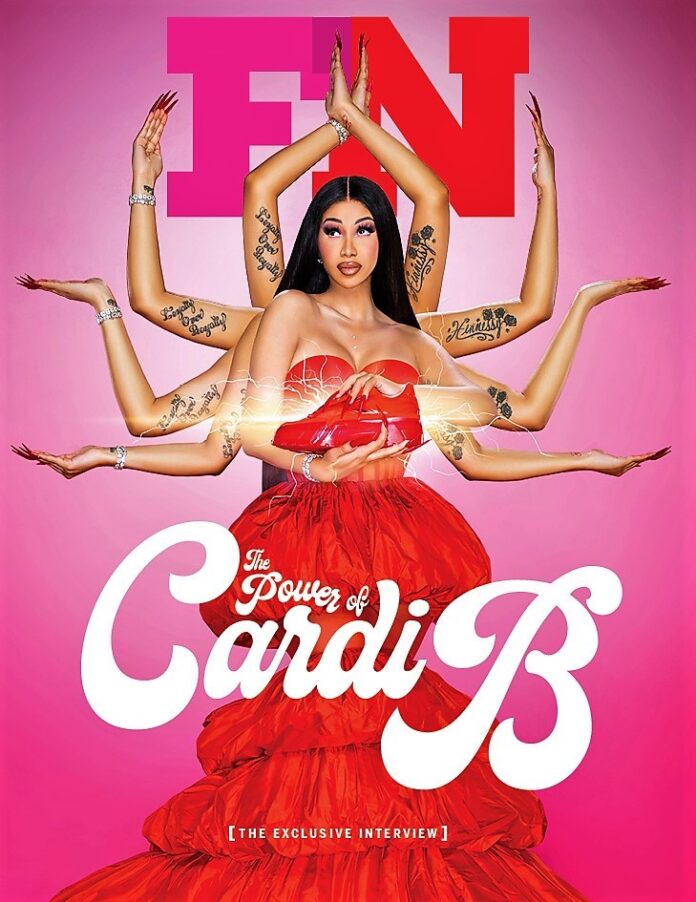 BOSTON–A group of Hindus are upset with Canton, MA-based Reebok for a campaign in which rapper Cardi B emulated goddess Durga with a sneaker in her hand to launch “new Reebok x Cardi B collection” releasing November 13.

Hindu statesman Rajan Zed, in a statement, said that goddess Durga was highly revered in Hinduism and was meant to be worshipped in temples or home shrines and not to be used for selling shoes for mercantile greed. Inappropriate usage of Hindu deities or concepts or symbols or icons for commercial or other agenda was not okay as it hurt the devotees.

Reebok, Cardi B and Footwear News (whose cover depicted the objectionable image) should not be in the business of religious appropriation, sacrilege, and ridiculing entire communities. It was deeply disrespectful and trivializing of divine Hindu deities to be ill-used in scenarios like this, said Zed, who is President of Universal Society of Hinduism.

Although Cardi B had since said “I am sorry” over this issue, but many Hindus felt that she was not sincere enough in the video when she stated—I disrespect a like a “goddess or something”. Hindus would like her to visit a nearby Hindu temple and pay obeisance, take a class in Hinduism, and issue a formal apology on her website; Rajan Zed indicated.

Zed also sought official apology from Reebok Brand President Matthew H. O’Toole and Footwear News Editorial Director Michael Atmore. He suggested that companies like Reebok and Footwear News should send their senior executives for training in religious and cultural sensitivity so that they had an understanding of the feelings of customers and communities when introducing new products or launching advertising campaigns.

Was this the “Footwear News” way of paying “homage to Durga” (which claimed to be a “leading shoe magazine” and which had reportedly since apologized and changed the cover)? \Zed wondered.

Hinduism is the oldest and third largest religion of the world with about 1.2 billion adherents and a rich philosophical thought and it should not be taken frivolously. Symbols of any faith, larger or smaller, should not be mishandled, Zed noted.

Zed further said that such trivialization of Hindu deities was disturbing to the Hindus world over. Hindus were for free artistic expression and speech as much as anybody else if not more. But faith was something sacred and attempts at trivializing it hurt the followers, Zed added.

In Hinduism, highly worshipped goddess Durga is considered savior of the world from evil. There are about three million Hindus in USA.

The “new Reebok x Cardi B collection” was described as “Designed with Cardi B. Built for drama.” Reebok International Ltd. claimed to be “a leading worldwide designer, marketer and distributor of fitness and lifestyle footwear, apparel and equipment”.

COVID Had No Impact on Venture Capital as Global VC Funding Soars to $300.5 Billion in 2020

Unsold residential units in India may get extended tax break