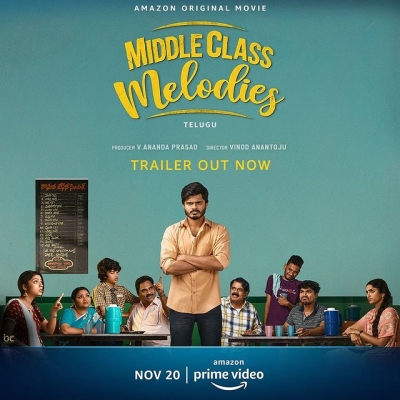 At first you would think Vijay Deverakonda dubbed for him. Anand Deverakonda does sound a lot like his superstar brother, blame it on genetics more than anything else. For all other practical purposes, going by what you see here, Anand seems focussed on carving a very different space from the Vijay Deverakonda trademark.

Middle Class Melodies — don’t go by the title — is not a musical, nor does it have any reference to melody. The title is used to convey a feel of the regular humdrum of life. For a more direct impact, perhaps, Middle Class Chutney (or Middle Class Flavours?) might have seemed more apt, considering the film is a comedy drama about a young man’s obsession to whip up the perfect Bombay Chutney, and his dream to set up an eatery.

Anand Deverakonda plays Raghava, a hothead who takes pride in whipping up the perfect Bombay Chutney. While his temper seems to be a legacy of his father (Goparaju Ramana), Raghava picked up the nuances of preparing his special dish from his mother (Surabhi Prabhavathi). He dreams of opening a tiffin centre from where he can sell his Chutney, and he hopes his Bombay Chutney will make him famous one day and be the pride of Guntur, his hometown.

Vinod Ananthoju’s film is narrated simply and with adequate humour, throwing in the obvious message about the importance of chasing one’s dreams. Writer Janardhan Pasumarthi’s focus seems primarily on setting up a feel-good experience for the audience, and little else.

For that reason, the film never really had much of a story to tell and tends to drag in portions. Ananthoju, Pasumarthi and company come up with interesting characters and situations that maintain a feel-good mood all through.

In turn, interesting characters translate to good performances. Anand Deverakonda is clearly not cut out for larger-than-life outings, but he does impress as the guy next door with a big dream. With roles increasingly being written around realism and authentic mannerisms, this is a great time for Anand to be labelled a promising young actor. Varsha Bollamma looks apt for her role of Sandhya, while most others in the cast are adequate. Goparaju Ramana as Raghava’s father is truly impressive.

Review: The Power: The Godfather gets a dated rehash