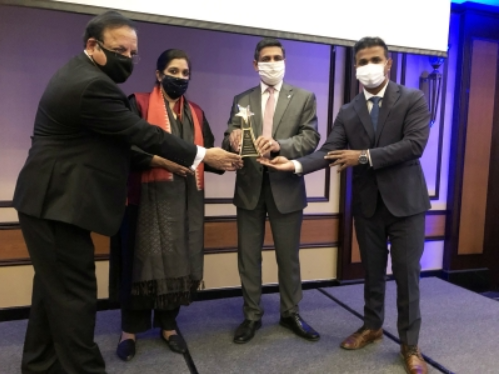 Toronto– The Haryana Association of North America (HANA) has conferred its annual Haryana Ratan Award on Ambala man Sandeep Goel, who is the CEO of ICICI Bank in Canada.

HANA President Kuldeep Sharma and Indian Consul General Apurva Srivastava presented the award to Goel at the second annual gala of the largest organization of the Haryana diaspora in North America at Marriott Hotel in Brampton.

“The aim of HANA is to connect the Haryana diaspora with their roots, keep our traditions alive, promote business relations with Haryana and honour top Haryanvi achievers in North America,” said Kuldeep Sharma who comes from Faridabad and is one of the top hoteliers in Canada.

Accepting the award, Goel said: “It is a matter of great pride for me and my entire family to receive this recognition from the community given how close I am to Haryana. I was born in Ambala city and though my upbringing took place in Delhi I am deeply connected to my place of birth as I spent two months of summer break each year in different parts of Haryana. My marriage to my wife Bindu who is also a proud Haryanvi further deepened my connection with the state.”

Describing Haryana as the place of Mahabharata, Goel urged the Haryana diaspora to follow the principles of life enshrined in the Gita while adapting to life in North America.

“Adapt to the new life and new opportunities, but don’t forget your roots.”

He said Haryana must be promoted as a religious tourist destination because of its connection with the Mahabharata.

Haryana’s arts and crafts also have a big market potential in North America, he said.

“Because of their novelty, Haryana arts and crafts will appeal to people in North America. We should leverage technology and use celebrity endorsements to promote these products here,” said Goel.

She said the Indian Consulate General will extend all support to promote their traditional crafts and the state as a tourist destination in Canada. (IANS)