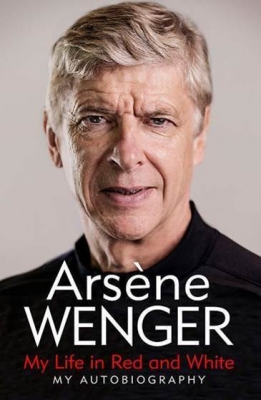 New Delhi– “What does this Frenchman know about football? He wears glasses and looks more like a schoolteacher,” Arsenal captain Tony Adams had remarked derisively when Arsene Wenger arrived in 1996, the first foreigner to be appointed manager of an English football club. By the time he left 22 years later, he had 1,235 matches, three Premier League titles, seven FA Cups and seven Community Shield titles under his belt.

He masterminded the 49-match unbeaten run of “The Invincibles” in 2003-04, a record that stands to this day and saw the club’s share price rise from 800 pounds to a staggering 17,000 pounds. He is perhaps the only manager/coach to have turned down offers from Real Madrid (twice), PSG and Juventus and the national teams of France and Japan all because he “had a mission at Arsenal”.

And yet, his departure from Arsenal was far from pleasant as Wenger writes in his autobiography, “My Life in Red and White” (Weidenfeld & Nicolson) , translated by Daniel Hahn and Andrea Reece.

“Thing were getting more and more difficult at Arsenal. The supporters were impatient, the public was turning against me and I had the impression that the general atmosphere was just like the one that had greeted me when I first arrived at the club. I know twenty-two years leading a club is wonderful, but I wasn’t ready to go; if it had been just up to me, I would have stayed until my contract expired. I told myself I had given a lot, sacrificed a lot for the club, and I felt the hostility of a section of the fans and the board was unjustified. I felt as if I had built the training centre and the stadium myself brick by brick, and that my car drove there every morning of its own accord. Not being able to go there from one day to the next, no longer going to the matches, no longer living my passion for the club, was very hard, very brutal. Arsenal was a matter of life and death to me, and without it there were some very lonely, very painful moments,” Wenger writes.

From the beginning of the century, he writes, Arsenal “was mirroring what was happening around the world: the structure of football was evolving and we were part of that. Bit by bit, clubs were being purchased by foreign buyers and the Premier League no longer belonged to the English. In 1996, I was the club’s first foreign manager, and we all remember the reactions that provoked. Today, the majority of the managers are foreign, as are the owners. Only the crowd, the supporters, have not changed. We have moved gradually from supporter-owners to investor-owners, with the new rules this has imposed: all clubs have to become corporate entities. The human aspect has been lost, or at least diminished.

“Organisations are more top heavy, and the technical side – the team, the players, the academy – is becoming smaller within companies where the commercial, marketing and press departments take up ever more space. When I started, the club had 70-80 staff, then we went up to 200, 400, up to 700 staff when I left Arsenal in 2018. In the academy alone, there were 200 staff.

“When a club, an organisation gets too big, there is a risk it might lose its performance culture, and instead think more about protecting personal interests and preserving the status quo. As a result, this does not allow any real innovation or genuine risk-taking.

“The time available to dedicate to pure technique was reduced. I became more frustrated; it was as if I were being prevented from doing my work while I was doing it,” Wenger writes.

If you read between the lines, you will realise he was past his “due date”. Wenger has moved on in life and is today overseeing a larger canvas as FIFA’s Chief of Global Development.

“Football should not be set in stone. It should be made to evolve towards more transparency in the game. This is essential, and that is why I have chosen to get involved in these changes. By getting football to evolve this way, we can restore it to what it really is: an art, a collective art,” he writes of his new role.

“Among my missions at FIFA, there is one that is particularly close to my heart: the training of coaches and the follow-up with former players who after their careers have ended would be keen to occupy leadership positions in clubs or on football’s official bodies,” he adds.

“My responsibility today is to throw myself completely into this role at FIFA and to convey what I have learnt, especially to those youngsters who ask me: ‘What is a coach? What is a manager?’ Nothing can replace what they will discover for themselves, from their own experiences. But they can reflect on and be enriched by the teachings I have been able to draw out of so many years in the profession and involvement in the world of football,” Wenger writes and then elaborates on this.

“For me a coach is somebody who knows what they want, who has a clear vision, a strategy.

“Who is capable of expressing it clearly.

“Who puts their ideas into practice and is capable of getting their players to support their plans.

“So they should be a good communicator.

“A coach is somebody who can handle stress, judgement, pressure. Who remains lucid, who in difficult situations in able to take a step back, look at the situation from above. Who does not respond to stress with passivity or aggressiveness,” he writes.

“Coaches ought also to be aware of the responsibility that football has, the power this sport has for young people, for society, the appeal it exercises, the fascination, sometimes the devotion it elicits. A coach, then, is someone who has a duty to be equal to this power and to make this game as beautiful as it can be, to show the art of football at its purest,” he concludes.

Given the passion he displayed at Arsenal, there is no doubt that Wenger will scale new heights at FIFA. (IANS)