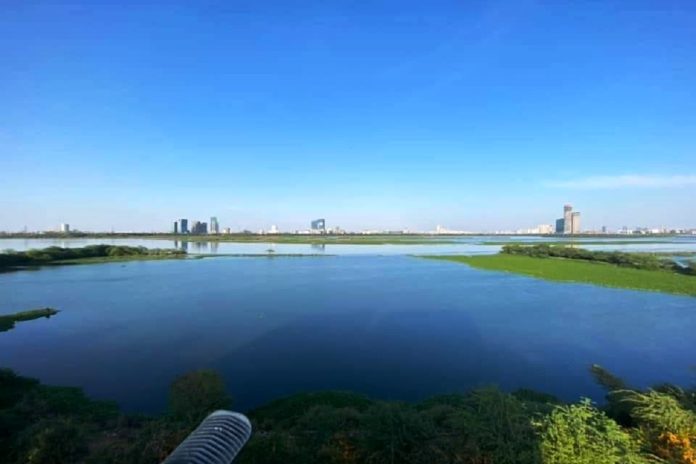 Agra– White foamy froth from detergents, dead animal bodies, domestic garbage packed in polythene bags, construction site debris and stink all around! That is the pathetic scene at the Yamuna river between Babars Ram Bagh to Jahangirs Etmauddaula to Akbars Fort, and Shah Jahans Taj Mahal a few kilometres downstream.

These glorious Mughal monuments were sited near the waters of the holy Yamuna, revered by Hindus as a goddess. But alas! Due to the apathy of successive governments, the Yamuna is a stinking sewage canal today.

The flow of water has reduced to a trickle as upstream barrages have held back all the fresh supply. The small quantity that is discharged at Okhla barrage is diverted to the Agra Canal. What flows down to Agra is industrial effluents, drain water released by human settlements on the flood plains and sewage discharge from towns like Faridabad, Ballabhgarh, Palwal, Vrindavan and Mathura.

“It makes little sense to measure the level of pollution in the water, because the liquid flowing down is not water by any definition,” according to activist Sandeep Agarwal of India Rising.

As the temperature has now started dropping, the pollution level has gone up many times. The aquatic life is under threat due to the depletion of oxygen in the water.

The four months of the general lockdown and shutdown of monuments for six months proved a healing time for nature. But scanty rain in the Agra region and now garbage burning and the festival season, are pushing up the pollution level again.

Despite global concern expressed from time to time over the high level of air and water pollution in Agra, posing a threat to the safety of the 17th-century monument of love, the Taj Mahal, and another half a dozen Mughal monuments in and around the city, neither the state government nor the central authorities have taken appropriate measures to contain the environmental threats, say green activists.

Even union transport minister Nitin Gadkiri has forgotten his promise soon after the 2014 Lok Sabha polls, that he would start a steamer service to ferry tourists from Delhi to Agra. Not one baby step has been taken to clean the river, desilt or dredge the slush to make way for uninterrupted flow of freshwater in the river, says Shravan Kumar Singh, vice president of the Braj Mandal Heritage Conservation Society.

The Bharatiya Janata Party has two Lok Sabha members and one Rajya Sabha member, nine MLAs, one mayor, one district board chairman. It is the ruling party both in the state and at the Centre, but sadly all of them have collectively failed to restore the good health of the Yamuna river. Over the years, thousands of crores of rupees have been squandered on cleaning the Ganga and the Yamuna in Uttar Pradesh, but both the rivers continue to remain in a pathetic condition, laments environmentalist Devashish Bhattacharya.

Most big and small rivers in India need attention. A nationwide programme to clean, desilt, dredge the river beds is long overdue. The opposition parties too have been equally guilty of not taking up the cause of rivers and lakes and other water bodies, river activists in Agra say.

To keep the river alive a regular minimal flow in the Yamuna round the year should be the first priority of the government. The share of water for downstream cities has to be released by Haryana and Delhi. “This is the first requirement to ensure that the river did not die and the rich aqua life was protected as also to bring down the pollution level.”

All the drains from Delhi to Agra opening into the river have to be diverted. Not a single drain should be allowed to discharge untreated wastewater. The UP pollution control board should identify and take appropriate action against polluters. The Pollution Act provides jail terms and penalties for polluting community water resources, river activists said. At least one metre of silt has to be removed so that water seeps, percolates, and raises the water table of the city, activists Rahul Raj and Deepak Rajput said.

Years ago, the Supreme Court had ordered shifting of dairies, dhobi ghats, and transport companies from the Yamuna Kinara road, but the district administration has failed to comply with the orders. One wonders what the River Police squad is doing, as people are still seen defecating on the river bed, as in the past, green activist Padmini Iyer said.

River activists demanded immediate action on the Yamuna barrage project hanging fire for at least two decades for want of political will. “The Yogi government has already sanctioned a Rs 350 crore rubber check dam downstream of the Taj Mahal, but for reasons unknown, and of course the indifference of the local politicians, the project remains a non-starter,” said Dr Harendra Gupta, a medical practitioner. Six feet of standing water behind the Taj Mahal, Etmauddaula, Ram Bagh has to be ensured, to keep the monuments healthy and safe from pollution, apart from adding to the scenic ambience, he added. (IANS)