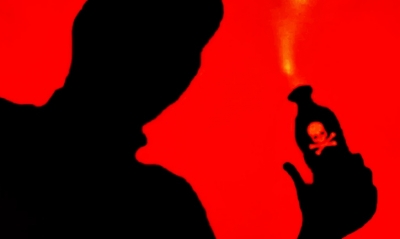 Beed, Maharashtra–In a heart-wrenching Diwali tragedy, a 22-year-old victim of acid attack by her boyfriend lay abandoned in a roadside ditch for over 12 hours, and after a 16-hour fight for her life, she died in a hospital here on Sunday morning, police said.

Moving swiftly, teams of Maharashtra Police launched a manhunt for the absconding accused and zeroed in on him at his hideout in Nanded district on Sunday evening, Neknur Police Station Investigating Officer Laxman Kendre informed amid a political uproar.

The ghastly incident happened early Saturday morning when the duo – Avinash R. Rajure, 25 and Savitra D. Ankulkar, 22, rode on a motorcycle from Pune to their home in Shelgaon village, Nanded district, for Diwali celebrations, said Kendre.

“En route on the 450-km journey, around 2 am on Saturday morning, the accused Rajure stopped his vehicle at a desolate spot on the Yellamb Ghat region and attacked the victim,” Kendre told IANS.

The police official said that first the accused attempted to strangulate her but she fought back, then he took a bottle of acid and threw it on her as she screamed for help in the dead of the night in that remote area.

Not stopping at this, he removed petrol from his vehicle, poured it on her, set her afire, pushed her into a deep ditch beside the road as she burnt and fled from the spot.

“A shepherd tending to his flock heard her agonising cries from the ditch around 2 pm (afternoon) on Saturday and immediately informed us. We reached the spot and found her in agony with serious acid and petrol burns, and rushed her to the Beed Civil Hospital,” Kendre said.

Medicos at the hospital confirmed that she had sustained 50 per cent burn injuries due to double-impact of the acid and the petrol fire and breathed her last on Sunday morning at the hospital after a 16-hour battle for life, he said.

As per preliminary investigations, the accused and victim stayed together in Pune as live-in partners since few weeks, though the motive behind the murderous attack is not clear, he added.

The Neknur Police Station has registered a case of murder while the Beed Police sounded a high alert for all district border police outposts from Pune to Nanded in an effort to nab the accused Rajure.

“He has been detained by Nanded Police and a team has left from Beed to take him into custody. We shall arrest and produce the accused before a court here on Monday,” Kendre said, as her family reached Beed to claim her body.

Nationalist Congress Party leader and Social Justice Minister Dhananjay Munde from Beed district took a serious note of the incident and discussed the issue with the local police and administration.

“It’s a grave matter and I have asked the officers to ensure justice for the victim as early as possible,” Munde said.

The BJP’s Leader of Opposition Pravin Darekar termed it as a blot on the face of the state while BJP Women’s Wing Vice-President Chitra Wagh slammed the government over the incident.

“This is the 8th such incident in recent weeks and reflects poorly on women’s safety in the state. We are ashamed that this has happened. What is stopping the state from implementing a Disha-type law in Maharashtra,” Wagh demanded. (IANS)

It’s only hypocrisy, pretence on Netaji, unless you bring back his mortal remains: Ashis Ray