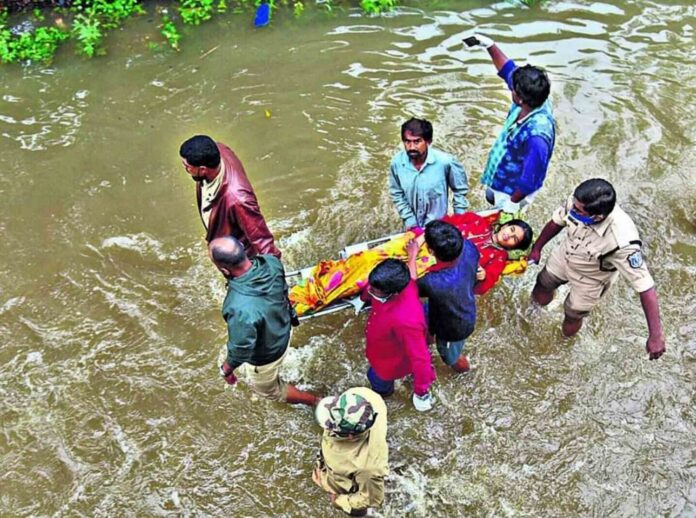 Hyderabad–Torrential rains and flash floods in Hyderabad have affected over 37,000 families, a top civic official said on Sunday.

The heavy rains and floods on October 13-14 and again on October 17 inundated many areas, affecting 37,400 families.

Another 2,100 families were evacuated to safer places on October 17.

Since the weather office has forecast more rains in the next couple of days, the GHMC, as a precautionary measure, is evacuating residents of low-lying areas.

The authorities also distributed 90,000 meals during lunch time and 60,000 meals for dinner.

The engineering wing and Disaster Response Force (DRF) teams are pumping out water from the apartment cellars and inundated colonies. As 72 teams and 106 water pumps from the engineering and maintenance side and 170 monsoon teams with 202 water pumps are engaged in the activity.

In order to contain water-borne and vector-borne diseases, the entomology and DRF teams are taking up activities like anti-larva operations, and spraying of bleaching powder and sodium hypochlorite in the cellars and inundated areas.

Thirty tankers, each from the DRF and fire services, were pressed into service for spraying the sodium hypochlorite.

“DRF teams rescued over 500 citizens from this area alone and 2,500 citizens in the city and moved them to safety. We are striving to reach out to every citizen in need in the shortest time possible time,” he tweeted.

50% men admit rise in bias against women at workplace: Survey