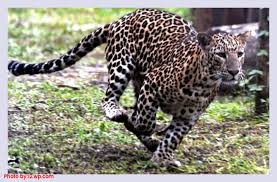 Bijnor (Uttar Pradesh)– In a seemingly bizarre diktat, the Uttar Pradesh Forest Department officials have asked farmers in Bijnor and adjoining districts to beat drums, wear helmets and neck pads and take a dog along, while visiting the fields.

This is expected to apparently save them from leopard attacks. With barely a fortnight left before the sugarcane harvest season begins, farmers will be working in their fields in large numbers which makes them vulnerable to leopard and tiger attacks.

Forest authorities have intensified their awareness programmes to minimize the man-animal conflict in the region which is in the vicinity of the Amangarh Tiger Reserve.

Posters have been put up outside ration shops in rural areas, informing the farmers of ‘preventive’ measures.

Besides, several forest teams are also visiting villages and holding meetings with the farmers to make them aware of the safety measures.

“The sugarcane harvesting season is set to kick in. There are many big cats around the sugarcane fields as they provide perfect sanctuary to them. To mitigate the man-animal conflict, we are making the farmers aware that they should go to the fields wearing helmets and neck pads. They should make a noise by beating drums or playing loud music on mobile or radio while working in the fields,” Bijnor Divisional Forest officer M. Semmaran said.

“In addition, they should venture out in groups and also take dogs with them. If farmers spot any big cat in their respective areas, they should inform forest officers whose contact numbers are written on the posters being pasted on the walls in rural areas. We have formed a special task force to take quick action on the tip-off about big cat sightings.”

Leopard attacks have been increasingly common in the district and last year, a leopard had killed six persons. (IANS)