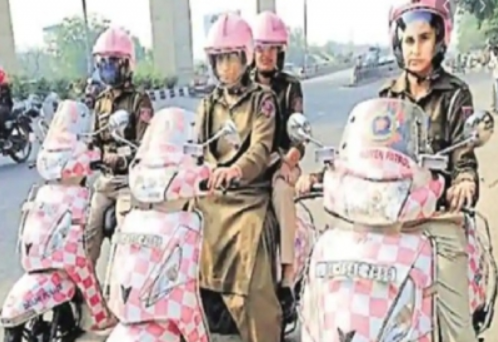 Lucknow– Amid rising reports of sexual and brutal offences against women everyday, the Uttar Pradesh government has decided to further ramp up efforts to ensure their safety and security with the creation of a special women police unit that will be operational round the clock.

The new women patrolling force called ‘Pink-Patrol’ is a part of the Mission Shakti campaign launched to mark the beginning of Navratri.

Approximately 250 women police personnel have been deployed in the ‘Pink Patrol’ after going through a rigorous training.

In the first phase of this program, around 100 Scooty and 10 SUV’s have been put into service in the State.

The ‘Pink- Patrol’ is designed to take immediate action on the cases of molestation and crime against women.

Under the Safe City plan the ‘Pink Patrol’ will operate in the places that have been identified by Lucknow police as hotspots.

According to the government spokesman, “These will be initially stationed at places including girls’ colleges places where women move around in large numbers. Areas where cases of molestation take place will also be included.”

Patrolling will also be done on basis of complaints and suggestions from women.

Lucknow Police officials said that ‘Pink Patrol’ can also be deployed at night as per the need. The force will be directly connected to the nearest police station with 1090, 112 and integrated control room so that additional police force can be dispatched immediately, if needed.