BOSTON–On September 26th, 2020 LearnQuest Academy of Music brings to the virtual stage the elegance and the mellifluous voice of the incomparable Kaushiki Chakraborty. Known for her soulful rendition of Khyals and Thumri’s in the Patiala gayiki style, Kaushiki often brings an effervescent energy to her performance.

Imbued with emotion, her concerts ring with a joy and a transcendent elegance. Kaushiki has charmed her way into the rasikas hearts the world over. From the first moment she debuted, it was evident that she was destined for greatness. At the age of 16, she shared the stage with stalwarts like Ustad Alla Rakha, Ustad Zakir Hussain, and Ustad Amjad Ali Khan. An innovator, Kaushiki believes that the “mind is where music originates”. There is a verse in the Vijñāna Bhairava Tantra:

My interpretation of this verse is when one immerses oneself in the rapture of music, the body becomes the supreme space that vibrates with the song of the great musician who is breathing music into life and life into music. I believe that Kaushiki has allowed both body and mind to become that space that vibrates the resonance of the heart. In these unprecedented times of hardship and bleakness, artists around the world are putting more heart into lifting the universe’s spirits.

Kaushiki’s music not only does so naturally, but her performance will help other struggling artists as well. As LearnQuest connects the world through music, a portion of the proceeds will be used to give back to the musical community.

At 9:00 pm EDT on September 26th, join the rasikas across the globe as Kaushiki Chakraborty performs for Arati Music Foundation (AMF) of Kolkata. The foundation was founded in the memory of Late Smt. Arati Das, beloved mother of the Sitar Maestro Pandit Kushal Das. Their online concert series “Shanti” was created to spread peace, harmony, and unity across the world.

The concert series is being streamed in India, Europe, Australia, USA and Canada and is being distributed in the USA and Canada by LearnQuest Academy of Music. The premium quality audio-video streaming service is provided by Viewcy of New York.

A donation of $15 provides an access code to stream the concert. Go to :

LearnQuest appeals to the patrons to consider donating additional amounts to support classical musicians in severe financial distress due to this unprecedented pandemic. 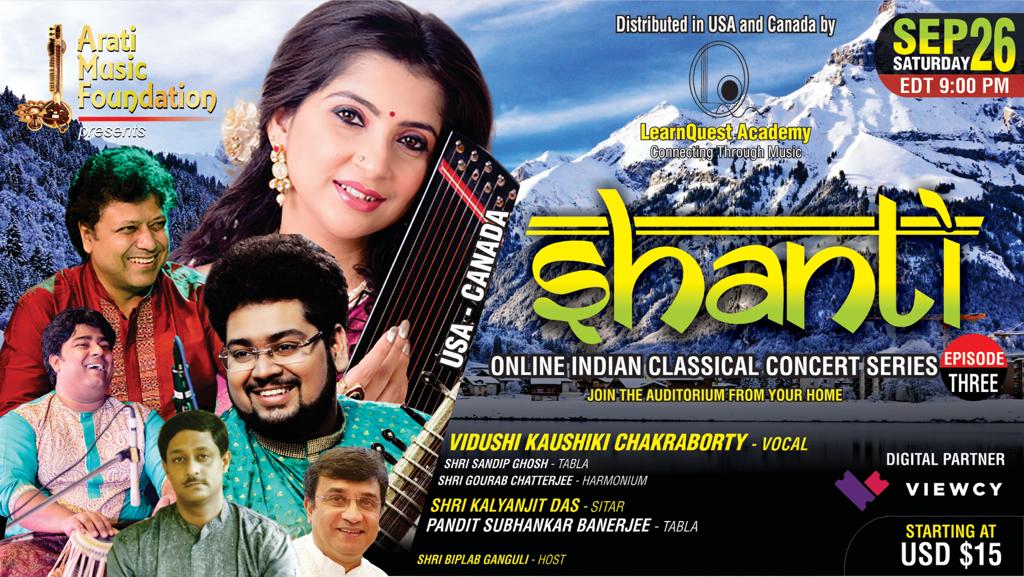