SETU and IAGB jointly presented the thrilling murder mystery in an innovative virtual format. Titled “Seven Steps Around the Fire,” play is written by the playwright Mahesh Dattani and was directed by Subrata Das, co-founder of SETU. The cast for two shows was different. Costume was designed by SETU Co-Founder Jayanti Bandyopadhyay.

“Very thankful for this successful fundraising collaboration with SETU and all proceeds from this effort would go to the local pantries,” said IAGB President Sanjay Gowda. “Congratulations to the SETU team for pulling off this virtual production so successfully and bringing this to all of us in our community to enjoy from the comforts of our home.”

Mr. Das said that the level of audience connections on both days varied between 110-140 and that is equivalent to about 250 people each day based on an average of 2 per household, which translates to 5 sold out 100-seat Arsenal blackbox performances.

“We have raised close to $7,000. This is significant given the ongoing difficult circumstances and given the show was a ticketed event,” said Mr. Das said, adding that the people who made it happen are Mr.  Gowda and IAGB Vice President Vaishali Gade, along with those who bridge SETU and IAGB, namely, Yogita Miharia, Sanjay Kudrimoti, and Noorain Buxamusa.

The SETU-IAGB team shared a note from one of the viewers that summarized the play: “I just wanted to reach out and say that I saw the play last evening and wanted to extend my praise to the cast and crew.  This was a really creative use of Zoom, and I loved what the actors did with such limited sets, i.e. the scenes with Anarkali and the scenes of Mrs. Rao riding in a car were pretty believable still. I’m also glad that the Indian American community is raising awareness about transgender rights within India.  Thanks for your part in putting on this production and for democratizing its access by moving it to Zoom.”

Prosecuted by the system and misunderstood by society, Dattani’s Seven Steps Around the Fire introduces audience to the world of the transgender community in India that has largely been ignored. At some point or the other, when presented the opportunity to interact with the members of the transgender community, most Indian population have followed the norm and overlooked their plight.

Seven Steps around the Fire 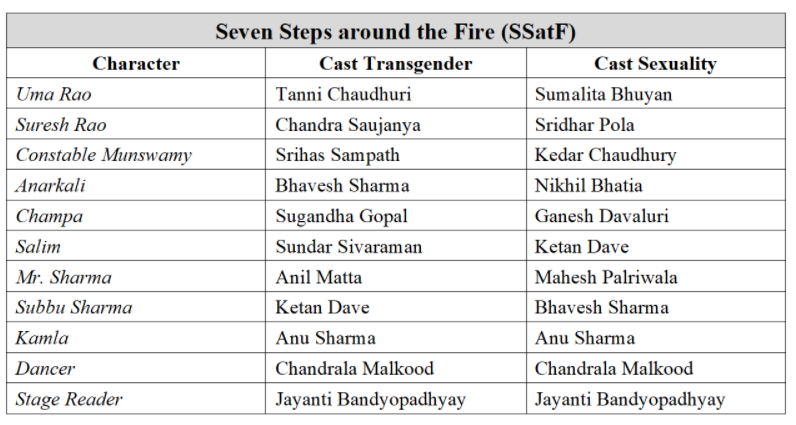