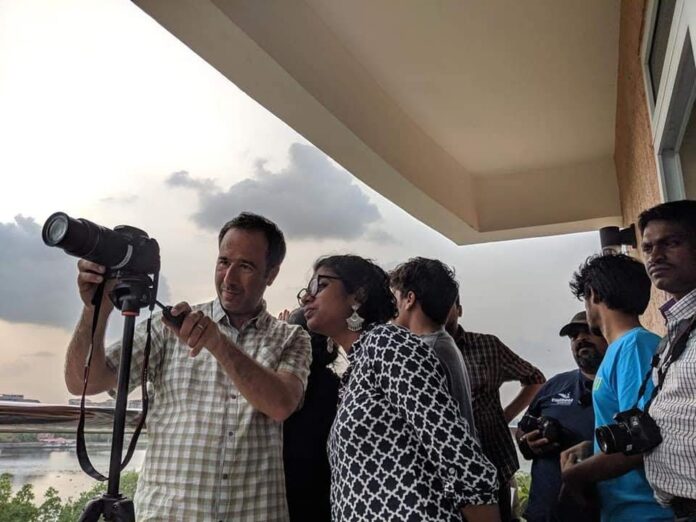 New Delhi–Believing that thousands of stories happen around us at all times and great documentaries are the ones that capture and explore the most compelling tales, characters and ideas — allowing us to better understand each other and the world we thrive in, Emmy-nominated filmmaker and writer Marc Ostrick says, “And yes, I do believe truth is stranger than fiction.”

For someone who has pioneered projects for Discovery, National Geographic and others for the past 25 years, training novice filmmakers aged 18-35 for 15 days who participated in the recently concluded Video Volunteers’ ChangeChitra program wherein they produced 16 documentaries over the past 18 months has been an experience to remember. With 60 aspiring filmmakers from 15 Indian states across the country, the films that were screened from September 1 on YouTube (https://www.youtube.com/videovolunteers) recently addressed a range of issues including gender, education, tribal issues, social inequality, trafficking, environment and others — from a youth perspective.

Stressing that he enjoyed the diversity of thought and points of view of the participants, it was wonderful to watch how they worked to find their own voice in the process of making their films, Ostrick says, “It was interesting to see their curiosity about the creative process and how different documentaries can be made.”

Although the past decade and more has witnessed a revolution in digital technology, making photography and filmmaking more affordable and democratic, Ostrick feels that it does not necessarily mean a quantitative increase in fine work. “Filmmaking is a craft that takes time to master. Just because a technology is available doesn’t mean that it will be used in creative, compelling and meaningful ways. Think about the pencil — it has been around for hundreds of years and accessible to almost everyone. But how many great novels have been written? I believe just because you have a camera, doesn’t make you a filmmaker,” he says.

Talk to him about the acute lack of platforms for documentary filmmakers in South Asia, and the filmmaker asserts that Internet and streaming services have allowed people to have an immediate worldwide audience. “YouTube and other open online platforms have made it easier to share work in the West. I think we have to adapt and use these mediums that allow us to share our stories – people are doing some really interesting short form work on TikTok and Instagram. In the West, people are taking advantage of these online platforms to great success. I just finished a feature documentary that just launched this week in India on Amazon. The film looks at female empowerment from five of Los Angeles best exotic dancers points of view. When I was starting out, it would be hard to imagine that finding a worldwide audience over the Internet would even be possible.”

Considering the fact that in many countries including India, documentaries are majorly dependent on state grants, Ostrick feels if one is self-censoring from the outset when applying for the grant, he/she is already compromised. “If you spell out exactly what you want to do and hold true to your convictions, then you don’t have to worry about compromising the process. A few films made during Change Chitra may be considered controversial by some. Film is subjective, art is subjective. I hope that these films can help open a dialogue and better understanding of the human condition. It is so critical in these times, that we are inclusive as a society and co-existing in peace makes life so much better.”

Talking about his critically acclaimed film ‘Open Hearted’, which almost “killed him”, the filmmaker, a pass-out from the prestigious Tisch School of the Arts, says that it follows his personal journey of preparing for, undergoing and recovering from his third open heart surgery at the age of 27. “So, I guess making the film almost killed me. The film is more of a medical comedy since my divorced parents were forced to come together and get along to help me through my operation. In doing so, they healed many wounds from their failed marriage and became friends once again.” (IANS)