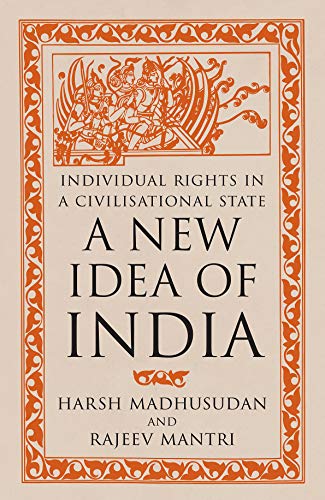 New Delhi– India is a Civilisational State engaged in a “grand undertaking to re-architect” the Republic. It should make a “clean break” from its “socialistic, feudal past” to maintain the momentum and should stake claim to be a world power, says a new book on the country’s journey as it approaches the 75th year of its Independence, even as it calls for course corrections in the areas of governance, bureaucracy, foreign policy and the judiciary.

“India is today attempting to achieve economic growth with individual freedom-expanding social change in a grand undertaking to re-architect the republic. This India will be more secure, equal and prosperous, seeking a greater sway in world affairs,” Harish Madhusudan and Rajeev Mantri write in “A New Idea Of India” (Westland).

Noted economist Sanjeev Sanyal, in the Foreword, has described the book as “an important stop in India’s intellectual evolution”, a process that for six decades “has been dominated almost entirely by ideas and ideologies derived exclusively from various shades of the Left”.

The new way forward, the authors state, is a “clean break from the socialistic, feudal past” that is “just not the correct policy prescription for India but also makes for good politics”, something that “for reasons of dynastic politics and inertia”, most of India’s opposition parties have so far been slow to respond to the changed context”.

Depreciating that a “section of the Indian intelligentsia” have “gone so far” as to proclaim that “India should not become a superpower”, the authors assert: “At home to a sixth of all humanity, India can and should stake claim to be a world power. For India to succeed and all Indians to thrive and prosper, it falls upon our leaders to both recognise that there is an intense desire for a better tomorrow among India’s billion plus people , and to draw lessons from the mistakes made in the past.”

This tide of heightened aspirations “has created a singularity, exerting insurmountable forces that are crushing and inescapable. Without deep introspection, the cynics long accustomed to shaping India’s self-image and direction will be unable to emerge from the singularity they find themselves in. India, in fact, would be best served if there was an intellectual and political consensus on the criticality of economic growth and individual rights , along with the recognition that India is a Civilisational State that can lead to a new universalism without homogenising humanity”, the authors maintain.

What then, are the course corrections required?

Not only should India ramp up its diplomatic strength, the selection process needs to be revamped with a separate exam to select foreign (service) officers assessing them on “parameters such as international aptitude, curiosity about the world, knowledge or demonstrated interest in foreign affairs and communications skills”, as recommended by a parliamentary panel, the book says.

It noted in this context that External Affairs Minister S. Jaishankar had, in February 2020, implemented a comprehensive restructuring of the ministry, initiating long-overdue administrative reforms necessary to align it with India’s changed trade and security objectives.

“As for police forces across the country, over five lakh posts are vacant, with the highest – around 1.80 lakh — being in Uttar Pradesh (India’s largest by population and the most significant politically).

Why is it surprising then, that there is no rule of law and any group can extract special benefits from the State based on its potential for violence,” the authors ask.

Then, the brief of the civil service is to execute the policy of the government of the day. “The argument that the bureaucracy acts as a check on the whims and fancies (even corrupt proclivities) of politicians isn’t sound. That’s not their job, but that of other institutions entrusted specifically with the task of maintaining transparency,” the book says.

It also speaks of the need for bureaucrats to be given ample time to develop expertise based on their interest and governmental needs. For instance, after every bureaucratic reshuffle, it’s quite common, for example, that the urban development secretary has taken charge as the home secretary, the information and broadcasting secretary is shifted to personnel and training and the steel secretary has moved to the finance ministry.

“Such a system, based primarily on generalists, does not allow officers to build domain expertise and is highly detrimental to the administrative efficiency,” the authors write.

As for governance, the book states it rather pithily: “The truth is that almost India’s half of ministries could vanish tomorrow and nobody would miss them”.

Why has it come to such a pass? “Ministries have to be literally invented to accommodate leaders and, when required, coalition partners. This situation also arises as India’s polity is also restricted when it comes to internal democracy.”

“Who Judges the Judges”, the book asks and points to the telling example of the National Judicial Appointments Commission (NJAC), whose creation had been approved by both houses of Parliament, ratified by 16 state legislatures and finally assented to by the President of India. The Supreme Court, however, struck it down 4-1 on the ground that it violated the “basic structure” of the Constitution – but did not recommend or suggest a better framework.

The current Collegium system of appointments, the book says, “has given rise to nepotistic tendencies in the judiciary which the Constitution makers would never have fathomed – the rot is so deep that it competes with the scourge of dynastic politics, but while the latter has been widely critiqued and has to pass frequent electoral tests, the lack of public knowledge about the extent of dynastic sway in the legal world has saved the judicial establishment from scrutiny”.

There have been rare instance, though. Of the 28 incumbent Supreme Court judges, Outlook magazine reported in 2016, 11 “had either judges or legal luminaries as relatives”.

Read this book- it provides you much to ponder over. (IANS)