NEW DELHI–Google on Tuesday paid tribute to the late veteran actor and dancer Zohra Sehgal as it dedicated its doodle in remembrance of her iconic film ‘Neecha Nagar.’

Through the doodle, the tech giant celebrated the release of the film at the prestigious annual Cannes International Film Festival. The artistic doodle sees an aged yet poised Zohra Sehgal acing classical dance mudras with a pleasant smile on her face. 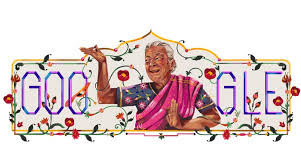 According to a statement on Google’s page, the illustration has been made by artist Parvati Pillai to celebrate the “one of the country’s first female actors to truly achieve recognition on the international stage.”

“Among Sehgal’s notable early work was a role in the film ‘Neecha Nagar’ (‘Lowly City’), which was released on this day in 1946 at the Cannes Film Festival,” the statement read.
It further said the film won Indian cinema’s first international critical success as it won the festival’s highest honor — Palme d’Or prize.

Born in British India’s Saharanpur, Sahibzadi Zohra Begum Mumtaz-ullah Khan attended a prestigious ballet school in Dresden, Germany in her 20s. She later went on to tour with the Indian dance pioneer Uday Shankar and later transitioned to acting after joining the Indian People’s Theatre Association in 1945.

The iconic actor moved to London and worked in several British television classics like ‘Doctor Who’ and the miniseries ‘The Jewel in the Crown.’

Recognised as one of the brightest stars of the Indian cinema, Sehgal won some of the highest awards of the country including the Padma Shri, Kalidas Samman, and Padma Vibhushan for her prolific contributions. (ANI)