The Instagram picture captures Varun as a shirtless teenager, flaunting his abs.

Los Angeles– Actress Priyanka Chopra Jonas is in the mood to soak in the last few days of summer.

Priyanka shared a picture on Instagram where she is seen standing in the sun. She wears a floral dress and completes the look with a messy bun, big sunglasses and hoop earrings.

“The last few days of summer,” she captioned the image.

Priyanka recently officially confirmed that her memoir, “Unfinished”, is ready.

The actress will next be seen in the digital film “The White Tiger”, where she features with Adarsh Gourav and Rajkummar Rao. The film is based on Aravind Adiga’s Man Booker Prize-winning novel of the same name, and is directed by Iranian filmmaker Ramin Bahrani.

The horror-comedy will be helmed by Pawan Kripalani, who has helmed thrillers like “Phobia” and “Ragini MMS” in the past.

“I am looking forward to working with Jacqueline and Yami. This will be my first collaboration with the entire cast. We need someone to add the craziness to this fun-filled entertainer and both of them will definitely add this magic to the script,” said the director.

The film is produced by Ramesh Taurani and Akshai Puri.

Kripalani said: “The script has gone through several changes after Rameshji and Akshai got on board. Saif, Arjun, Jacqueline and Yami perfectly complement each other in the film.”

The team has started the groundwork for the film, which will be largely shot across Dharamsala, Dalhousie and Palampur.

On Thursday, Karisma took to her Instagram account and posted a picture sitting in her balcony. She makes a casual statement in a black T-shirt and blue jeans.

Along with sharing the image, Karisma also spoke about how happy she is, to be wearing a pair of jeans after a long time.

“Love simple things (like wearing jeans after a really long time) #ThursdayThought,” she captioned the picture, which had her fans gushing.

“You look so beautiful,” a user commented.

“So fresh and young,” another user wrote.

The actress was last seen on screen in the web show, “Mentalhood”, which marked her digital debut. 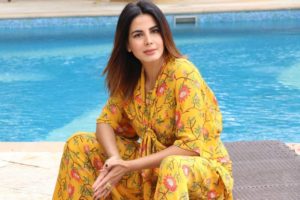 “And finally the actual morning… all the way from #kharota #himachalpradesh In the current times, I actually feel so blessed that I can travel and experience this,” she wrote on her Instagram account, adding pictures of herself enjoying the scenic background.

Kirti also asked people not to be scared to travel amid pandemic.

“And those of you who wish to do the same, just some precautions and you could do it too… #besafe #dontbescared,” she added.

Fans were mesmerised seeing Kirti’s pictures of her stay at Kharota.

“Such beautiful clicks,” a user commented.

“Wanna travel too,” another one wrote.

On the work front, Kirti was recently seen in the second season of the web show “Four More Shots Please!” She will also be seen sharing screen space with Parineeti Chopra in the Hindi adaptation of “The Girl On The Train”.

Mumbai– Actors Anupam Kher and Satish Kaushik will feature in the Vivek Ranjan Agnihotri directorial, The Last Show. They will start shooting in mid-September.

“SHOW MUST GO ON! We friends four friends @satishkaushik2178 #RumiJaffery & @vivekagnihotri and I are collaborating to rekindle the magic of cinema with an inspiring human drama #TheLastShow! The film is about friendship, human spirit, love, laughters & tears. We begin principle shooting mid-Sept. Pls bless us!” Kher posted on Instagram, while sharing the news.

Along with the post, Kher shared a picture where he sits alongside Agnihotri, Kaushik and Jaffery. All four are colour-coded in black T-shirts.

On August 25, Kher shared that he has resumed work. The actor took to Instagram Stories, where he shared two behind-the-scenes videos of getting his make-up done.

In one clip, he is even heard saying: “Nice to be back.” Along with the video he wrote: “#WeAreBack”.

Malaika Arora has lost track of what day it is!

Mumbai– Malaika Arora seems a little confused lately. She has lost track of what day it is.

“Is the weekend here??? Kinda lost track,” Malaika wrote with a new picture she has posted on Instagram, where she dons a no-makeup look.

Malaika had recently doled out tips for fans on how to deal with acne breakouts.

In fact, she has been sharing beauty secrets with her followers quite often during the lockdown. Not long ago, she shared how coffee can be good for health, too.

“Who said coffee is always bad for your health. Here’s a tip to turn that villain into a hero,” she captioned a post on Instagram.

Then she shared her secret. “Body scrub: Mix the leftover coffee ground with Some brown sugar and coconut oil. It serves as an easy, instant and aromatic home scrub. The caffeine in the coffee has potent antioxidants that help protect skin from sun damage and helps promote overall skin health #MalaikasTrickOrTip #OrganicBodyScrub#DIYBodyScrub,” she wrote.

Preity Zinta remembers her first film with a female director

Mumbai– Actress Preity Zinta has reminisced about her days in the late nineties, when she shot with a female director for the first time.

The year was 1999 and Preity, then one of the busiest young heroines in Bollywood, shot with director Tanuja Chandra for the film, “Sangharsh”.

On Thursday, the actress shared a clip from the film, which starred Akshay Kumar and Ashutosh Rana.

“Remembering Sangharsh today. My first film with a female director where I fell in love with a criminal, caught a terrifying serial killer and broke a leg… literally. Thank you @akshaykumar @sonunigamofficial #shradhapandit #AshutoshRana #TanujaChandra and the entire cast and crew for this unforgettable experience. #ReetOberoi will always be very close to my heart. #Ting,” wrote Preity, as caption with the video.

Bearing shades of Jonathan Demme’s multiple Oscar winner, “Silence Of The Lambs” (1991), starring Anthony Hopkins and Jodie Foster, “Sangharsh was Chandra’s second directorial feature after “Dushman”. The film had Preity playing a young CBI officer out tracking down a religious fanatic who abducts children. Fort this, she seeks help of a dangerous jailed criminal, played by Akshay Kumar. (IANS)