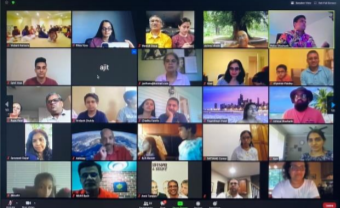 In April of 2020, it seemed that the streak of 40 years in a row of the Vivekananda Family Camp, organized by World Hindu Council of America, known by its Hindi acronym as VHPA, was in serious jeopardy, and posed a unique challenge due to the COVID-19 pandemic.

The Camp committee decided upon an innovative idea. Although it would not be nearly as ideal as holding the Camp in the beautiful foothills of the Berkshire mountains: the Camp can go virtual in 2020.

The 41st Vivekananda Family Camp was conducted virtually for the first time ever over the weekend of 31-Jul (Friday), 01-Aug (Saturday), and 02-Aug-2020 (Sunday). The Camp had over 50 attendees of which one-fourth were first-time campers, VHPA said in a statement.

The Camp was organized and executed almost entirely by second generation Hindu Americans who have attended Camp for many years and now as adults (junior volunteers) actively participate in the committee.

This virtual Camp had elements of the in-person Camp that included fun games, prayers and aarti, education program, and cultural performances. The logistical and technical challenge of executing virtually for three days via Zoom was met head on by the junior volunteers.

The first session on Friday started with a welcome message followed by prarthana and aarti that were chanted by everyone in the call but what made it truly special was that the aarti with mandir, diya, and bells was conducted in one of the attendee’s homes and was broadcast in the Zoom session in all the sessions.

The large number of family members in the home made it seem as if campers were in the in-person Camp with 150 attendees all singing in unison. That was followed by an exciting treasure hunt game led by junior volunteers in which all the attendees ran around in their homes trying to find various items.

The Saturday and Sunday sessions also included the educational program for which
the theme was Choosing the Right Path: Selected episodes from Ramayana and
Bhagwatam and people were introduced to some fun with Vedic math.

During the education program, the campers were divided into three grade-appropriate groups each of which had 15-17 campers and the adults into their own group that included almost 30 adults.

The Sunday session included a fun quiz about what we learned during the Camp using
Kahoot. The virtual Camp ended on Sunday with virtual milk and cookies. The group hopes to see everyone in the real Camp next year in 2021!

With 10 Friendly Competitions and a Parade, IAGB Gets Ready for Virtual Republic Day Celebrations on Jan. 30