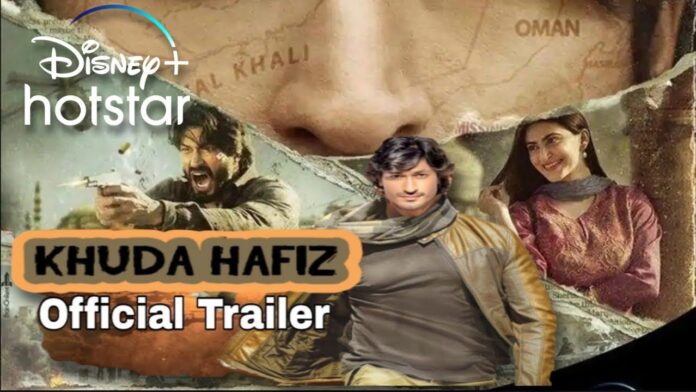 This time, Vidyut Jammwal keeps his shirt on for most parts. He is not much in the mood to fight either — well, not at least to unleash the familiar choreographed martial arts blitz.

In “Khuda Haafiz”, Vidyut is a coy Lucknow boy who remains in non-violent mode for almost half the film. Many might look at that situation as drastic image makeover for an actor whose career has so far banked on celebrating brute force. Others — hardcore fans – would be disappointed if they logged in only to watch him fight. Sure, there is the mandatory beating to a pulp once Jammwal gets going with the action jam. But by the time it happens, it becomes obvious that neither the film nor its hero will cater any sort of surprise cinematically.

In a line, this is a story about the old-school hero rescuing his damsel in distress. Writer-director Faruk Kabir sets out to fill a 130-plus minute runtime with that idea. The screenplay presents Vidyut as Sameer Chaudhry, a softspoken guy who never leaves behind his Lucknowi tehzeeb. Sameer marries the half-Hindu, half-Muslim Nargis (Shivaleeka Oberoi), according to his family’s wish. Mandatory melodrama plays out, before giving way to anxiety soon enough. The year is 2008 and the global recession renders both of them jobless.

Through an employment agency in Lucknow, the couple applies for jobs in the sultanate of Noman. Nargis gets her work visa and flies off, while Sameer must wait for a few more days. Twist in the tale comes when Nargis makes a frantic phone call to Sameer stating that things don’t seem right. Sameer arrives in Noman to bring her back home, but is shocked to realise she is now in the clutches of a powerful gang of flesh traders.

The narrative uses vintage Bollywood formula, in the way the story is moved forward. The lazy early portions give way to a second half that predominantly loads the action quotient. There is little scope for smart twists in this story, but the intermittent spin does throw up the odd dead body to keep the plot going.

If you aren’t tired yet of good old Bollywood masala, writer-director Kabir’s storytelling works adequately despite the occasional absurdities and the overall predictability of the script.

Kabir’s storytelling reiterates the basic cliche that commercial Hindi cinema will always primarily be about making the contrived look exciting. The peace-loving Sameer’s split-second transformation into a Hulk who seethes with rage and revenge, is an example. Despite being a regular smalltown boy, Sameer has an innate capacity to take on professional thugs, and crush their bones with elan.

The biggest reiteration of stereotypes, though, must lie in the casting. Watching the very desi Nawab Shah being passed off as the Algerian bad guy of the piece is amusing. The very Indian Aahana Kumra and Shiv Panditt play out local cops. Also, if the story is set in a foreign land and the hero is an Indian in trouble, there has to be a Muslim (preferably Pakistani) with a heart of gold to aid him. “Khuda Haafiz” finds that stock character in Annu Kapoor’s friendly taxiwaala Usman Ali. Still, Kapoor rises above the stereotype he plays out. Along with Vidyut, he remains pick of the cast.

“Khuda Haafiz” talks of joblessness and recession, and tries spotlighting crime against women of the most sinister kind in a thriller format. That should have made the film an engaging watch for an audience of 2020. It isn’t the case, mainly because the film is fixated on being dated rather than entertaining with a cutting-edge assuredness. (IANS)