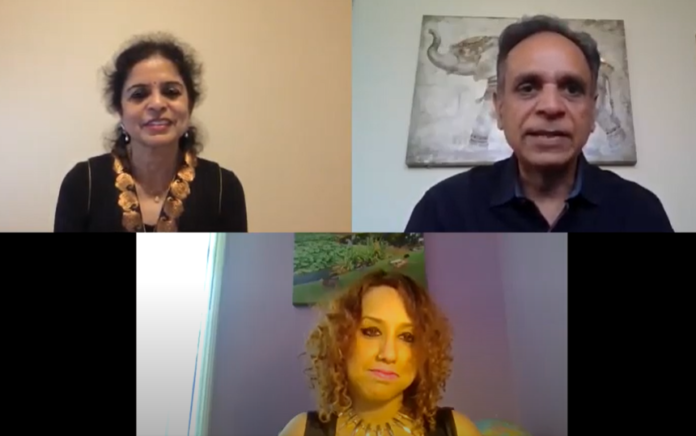 WALTHAM, MA–India Association of Greater Boston (IAGB), one of the oldest Indian-American community organizations in New England, made history this month by convincing 35 cities and towns from Massachusetts, New Hampshire and Connecticut to hoist the Indian flag on India’s 73rd Independence anniversary on Aug. 15.

This is the first time ever that so many towns and cities in the United States will be participating in India’s independence celebration in such a manner.

This outreach to cities and towns program was spearheaded by IAGB directors Jeyanthi Ghatraju and Tanu Basu.

In an exclusive video interview on Face-to-Face with INDIA New England News, Ms. Ghatraju and Ms. Basu talk about how it all began, how they approached cities and towns and how they responded.

Ms. Ghatraju is a director of IAGB. She is a Bharatanatyam dancer, choreographer and teacher from Westford, MA. She started her dance school, Natyanjali, 25 years ago with a mission to perform for charity and bringing the art form to those who cannot get to it (such as the Elderly in nursing homes). Since then, Ms. Ghatraju and her students have performed regularly at nursing homes and raising funds for noble causes.

Ms. Ghatraju has been recognized for completing 25 years of teaching in 2019 by the House of Representatives and the State Senate recently and with 4 MA Cultural Council grants this year. She was recognized recently with the US Presidential Service Gold Award for recording over 500 hours of community service in 2013 and 2017. She served in the IAGB Executive Board and as the cultural committee chairperson from 2015- 2017.

Ms. Basu is also a director of IAGB. She is a life-long enthusiast with a go-getter attitude. She holds degrees in English, Education and Dance – she has worn many hats – few to name would be that of a Sr. Recruiting Manager, a Public School teacher, social worker, orator, dancer and event coordinator, by virtue of which, her ultimate forte’ has been ‘people skills’.

She has a passion for serving within and beyond the community through cultural, civic duties and helping people in need. Having started with IAGB in her late teens, Ms. Basu has served as a Director in more than five IAGB Executive terms in the past. Her community service ‘mantra’ for this IAGB term is to be instrumental in serving the senior community in the area and also enthuse the next generation through culture and entertainment.