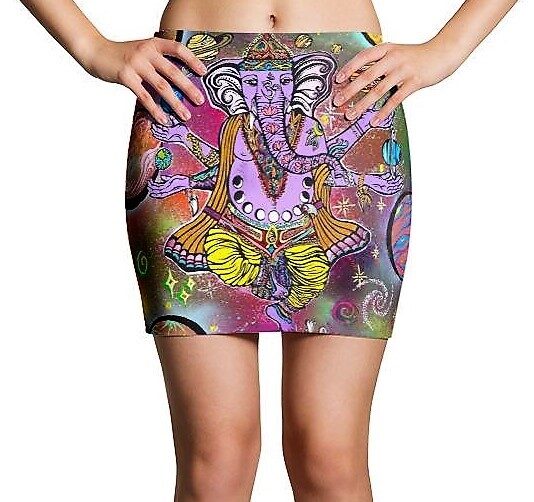 Upset Hindus are urging Toano, the Virginia-headquartered Enlighten Clothing Company, for immediate withdrawal of “Ganesh Balance Mini Skirt” carrying images of Hindu deity Lord Ganesh; calling it highly inappropriate.
Hindu statesman Rajan Zed, in a statement in Nevada, said that Lord Ganesh was highly revered in Hinduism and was meant to be worshipped in temples or home shrines and not to adorn one’s hips, groin, buttocks, genitals, waist, crotch, thighs, and pelvis for mercantile purposes.
Inappropriate usage of Hindu deities or concepts or symbols or icons for commercial or other agenda was not okay as it hurt the devotees.
Zed, who is President of Universal Society of Hinduism, also urged the firm to offer a formal apology; besides withdrawing Lord Ganesh mini-skirt.
Enlighten Clothing Company should not be in the business of religious appropriation, sacrilege, and ridiculing entire communities. It was deeply trivializing of immensely venerated Hindu deity Lord Ganesh to be displayed on mini-skirt, Rajan Zed emphasized.
Hinduism is the oldest and third largest religion of the world with about 1.1 billion adherents and a rich philosophical thought and it should not be taken frivolously. Symbols of any faith, larger or smaller, should not be mishandled, Zed noted.
Zed further said that such trivialization of Hindu deities was disturbing to the Hindus world over. Hindus were for free artistic expression and speech as much as anybody else if not more. But faith was something sacred and attempts at trivializing it hurt the followers, Zed added.
In Hinduism, Lord Ganesh is worshipped as god of wisdom and remover of obstacles and is invoked before the beginning of any major undertaking. There are about three million Hindus in USA.
Objectionable “Ganesh Balance Mini Skirt” at Enlighten Clothing Company was described as “meant to sit on hip”, and was priced at $34.99.
Enlighten Clothing Company, “founded in 2012 by artist couple Justin Chamberlain and Melanie Bodnar”, claims to be “spiritually inspired independent clothing and design company” and “devoted to creating affordable organic clothing,” Zed statement said. It sells clothing and accessories and states to “try and create” “socially responsible clothing”; with artists in US, Mexico, Sweden, Great Britain and Canada.