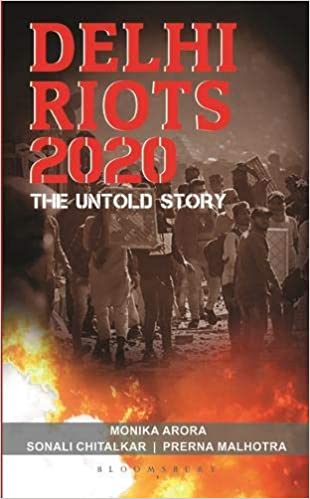 New Delhi– With top leaders of the ruling BJP siding with the author of ‘Delhi Riots 2020 – The untold Story’, the book withdrawn by the publishing house on Saturday, a string of authors ranging from government’s Principal Economic Adviser to Jawaharlal Nehru University (JNU) Professors to top IAS officers have decided to snap their association with Bloomsbury.

BJP General Secretaries Bhupender Yadav, who was part of the virtual pre-book launch that created the row, and P Muralidhar Rao, BJP’s Rajya Sabha member Subramanian Swamy, the party’s National Secretary Y Satya Kumar, party MP and national President of SC Wing Vinod Sonkar, BJP Spokesperson Suresh Nakhua, BJP leaders came out against the decision of Bloomsbury, which has now started to feel the ripple effect of the announcement of boycotts from authors.

Sanjeev Sanyal, who is the Principal Economic Adviser to the Ministry of Finance, has announced his commitment to “never publish” a book with the publication. The powerful voice has announced on Twitter: “I have not read the book in question and have no idea if it is good or bad. However, this is obviously not a quality control problem but about censorship.”

Sanyal is not alone. JNU Professor Anand Ranganathan, who has authored two books with the publication — ‘Love & Honor’ and ‘Rat Eater’ — too has decided to return the advance for his third book scheduled to come out. He told IANS: “What we witnessed yesterday was a clear assault on the freedom of expression and those who cherish the idea of it. You may disagree with a book, but this is unacceptable. We have decided to return the advance for our forthcoming book and disassociate with the publication if they don’t correct their position.”

So has Rajasthan-cadre IAS officer Sanjay Dixit, who called the move “censorship” and said he is in the process of sending a notice to Bloomsbury to withdraw his forthcoming book ‘Nullifyng Article 370 and Enacting CAA’ which was due for a September release by the publication house.

Monika Halan, an author and Consulting Editor of a business daily, announced that she too will join the boycott brigade. “Bloomsbury is off my list here on,” she too declared. Halan dubbed the move to withdraw a published book “shocking”.

Oranisers of two literature festivals have already thrown their weight behind the now- withdrawn book and its author — the Pondy Lit Fest and Mengaluru Lit Fest.

What may worsen matters for the publication house and increase the heat in the coming days is BJP’s Rajya Sabha member Rajeev Chandrashekhar’s move to urge Union Information and Broadcasting Minister Prakash Javadekar to intervene and order an investigation into what the MP claims could be a case of foreign publisher “violating Indian law”.

On Sunday morning, author Nityanand Misra sent an email to Bloomsbury to inform it that he has decided to “hold” his forthcoming book “Sunama: Beautiful Sanskrit Names”, his sixth book with the publication.

He wrote in that email: “If Bloomsbury India sticks with its decisions to not publish ‘Delhi Riots 2020: The untold Story’, then I will not be publishing ‘Sunama: Beautiful Sanskrit Names’ and any of my future books with Bloomsbury India.”

The whole controversy started with ‘Delhi Riots 2020: The Untold Story’, a book on the horrific violence in northeast Delhi earlier this year, getting withdrawn by publisher Bloomsbury India after it stirred a row in the wake of an “invitation” stating that BJP leader Kapil Mishra, seen by some as sparking the riots, would be among those attending its virtual launch on Saturday, which he did along with BJP General Secretary Bhupender Yadav and noted filmmaker Vivek Agnihotri.

The event was “organised without our knowledge by the authors, with participation by parties, of whom the Publishers would not have approved”, Bloomsbury said following online outrage, adding it “strongly supports freedom of speech but also has a deep sense of responsibility towards society”.

“… in view of very recent events, including a virtual pre-publication launch organised without our knowledge by the authors, with participation by parties of whom the publishers would not have approved, we have decided to withdraw publication of the book,” the publisher said in a statement, drawing a strong backlash from a range of BJP leaders, some of whom asked for a government probe into the matter. (IANS)