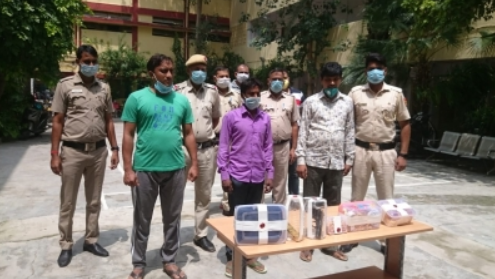 New Delhi– In a scene straight out of Bollywood, a jeweler in central Delhi’s Chandni Mahal conspired with two of his associates to fake a robbery at his own shop as one of them donned a ‘burqa and brandished a dummy pistol. All three have been arrested.

According to police, the jeweler named Abhijit Samanta also arranged fake jewelery in an attempt to get the insurance money and dodge the police.

The police received a call on Friday that a woman had robbed 2.6 kg of gold after making the caller unconscious. The police reached the spot at Gali Jatwara, Chandni Mahal and recorded the statements of the complainant. The complainant supplied prepared gold jewelry to other jewelers.

“He stated that at about 8:35 PM he collected a payment of Rs 50,000 from a jeweler and came to his office. As he entered his office a ‘woman’ in a burqa also came inside and put a gun to his head. He claimed the ‘woman’ slapped him and also snatched Rs 50,000 and keys of the locker from him. She then forced him to open the locker and tied his hands, legs and stuffed his mouth with cloth and took away all the gold jewelry kept in three plastic boxes weighing about 1.6 kg and a 1 kg gold bar from the locker,” said DCP (Central) Sanjay Bhatia.

Accordingly a case at Chandni Mahal police station was registered. However, soon the police found several discrepancies in his statement.

“During the investigation, the CCTV footage of three hours from three different cameras were analysed and it was noticed that the entry of the alleged woman was friendly and behaviour of the complainant was also suspicious during the commission of the alleged crime,” Bhatia said.

Samanta broke down after a six-hour prolonged interrogation and admitted that he had hatched the whole conspiracy along with co-accused Farhan, a resident of Darya Ganj and Munna, a resident of Narela.

The accused Samanta in order to get his loan amount waived, which he had availed from three different banks against the gold stock, hatched the conspiracy of a fake robbery of gold jewellery from his own office.

Samanta arranged the artificial gold bar and jewellery, co-accused Farhan arranged the toy gun and burqa and the other co-accused Munna executed the alleged robbery wearing the burqa.

Police said that Samanta after entering his office kept the door open and allowed an easy entry to co-accused Munna inside his office. Munna then put a toy gun to Samanta’s head and slapped him. After the ‘robbery’ of gold from the office of the complainant, he got himself tied up by co-accused Munna. However, the minute observations made by the investigating team of Delhi Police soon busted the fake robbery and the three accused were arrested. (IANS)