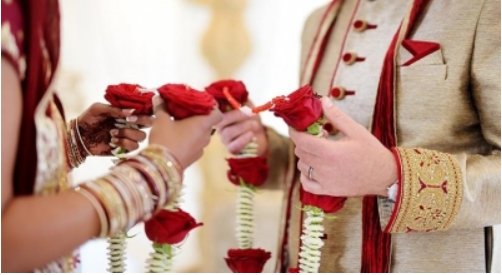 Hyderabad–The Covid-19 pandemic has completely changed the way the wedding ceremonies are held in Hyderabad.

In this historic city known for big fat weddings with a long list of invitees, large number of lip-smacking dishes and nightlong celebrations, the marriages have become simple and mostly a day affair.

The Covid-19 scare has taken the sheen off the typical Hyderabadi marriages. The situation has forced the people to go for simple ceremonies with limited numbers of guests at smaller function halls and that too during day time.

This was something unimaginable in the city a few months ago as even the middle class families used to vie with each other in hosting the wedding ceremonies at the biggest and most popular function halls with hundreds of invitees.

The city of nawabs is known for ostentatious marriages and this was seen as a social problem pushing many families into debt trap. Many individuals and organisations working for reforms and advocating simple marriages had failed in their efforts.

However, the Covid-19 outbreak changed everything. The lockdown began in March when the marriage season was at its peak. Following the government orders, the marriage halls were forced to cancel the bookings. Hundreds of marriages had to be postponed.

Wherever the postponement was not possible, the families organised the simple ceremonies at home with the list of invitees confined to few close relatives.

After the easing of lockdown norms in May, marriages resumed in function halls but were subject to many restrictions like number of guests, timing and physical distancing.

Unlike in the past when even the middle class families used to look for the most spacious function halls, they started hosting the wedding ceremonies at smaller avenues.

“This is something unprecedented in last 20-25 years in Hyderabad because almost all Muslim families in the city prefer weddings during night times,” said Syed Abdul Rauf, a senior citizen.

During the last few years, the marriages and Valima (the dinner hosted by the bridegroom a day or two after the wedding) had become a nightlong affair. Late dinners had become common and the subsequent ceremonies also used to consume several hours.

The wedding and Valima dinners are an integral part of the social life in Hyderabad. At the peak of the marriage season, people get multiple invitations in a single day. However, with the outbreak of Covid-19 and resultant lockdown, many citizens started missing the lively evenings with families and friends at the function halls.

Initially, many families postponed the marriages in the hope of an early end to the pandemic. However, with no end in sight even after six months, the families are conducting the marriages with all the restrictions.

The families of bride and bridegroom are spending hardly a couple of hours at the function halls. The Covid-19 scare is also keeping the guests away.

“A family invited 200 guests for a wedding recently but only 100 turned up,” said a manager of a function hall in the old city of Hyderabad.

Wearing the face masks, the invitees are not spending much time. Many are seen in a hurry to return after greeting bridegrooms and brides and their families.

Most of these weddings are happening over lunch. One no longer sees lavish menus. Majority of the receptions are limited to a couple of dishes and sweet. This is in total contrast to the pre-Covid situation when multiple dishes at every wedding was a common sight.

Socio-religious organisations and individuals, who had been working to bring reforms in the society, are happy to see the changes, albeit for different reasons. They hope that the community continues this new trend.

The record at Telangana State Wakf Board shows that the number of marriages has come down due to Covid. Every year around 60,000 marriages are solemnised in the state with more than 60 per cent of them in Hyderabad. This year, so far only 30,000 marriages have been performed.

A couple of years ago, some organisations had even called for a boycott of ostentatious weddings in the community. They have been appealing to the community to stop lavish expenditure, huge dowry, un-Islamic rituals, music and fireworks at the marriages.

They had pointed out that the poor and middle-class families are landing in a debt trap while trying to emulate the rich by taking huge loans to pay for the expenditure.

One of these organisations, Tehreek-e-Muslim Shabban had launched a campaign with the slogan ‘Ek khana, Ek meetha’ (one dish, one dessert).

Siasat, a leading Urdu daily known for many social campaigns, had also thrown its weight behind the initiative.

The Hyderabad chapter of All India Jamiat-ul-Quresh, a body of meat traders and exporters, has even announced that it will impose a fine of Rs 50,000 if any of its members are found arranging extravagant weddings.

The Muslim community in Hyderabad spends several hundreds of crores every year on big fat weddings.

It is estimated that lower middle-class and middle-class families spend anywhere between Rs 5-15 lakh on weddings. The expenses on hiring the function halls and food constitute about 50 per cent of the total expenditure. (IANS)