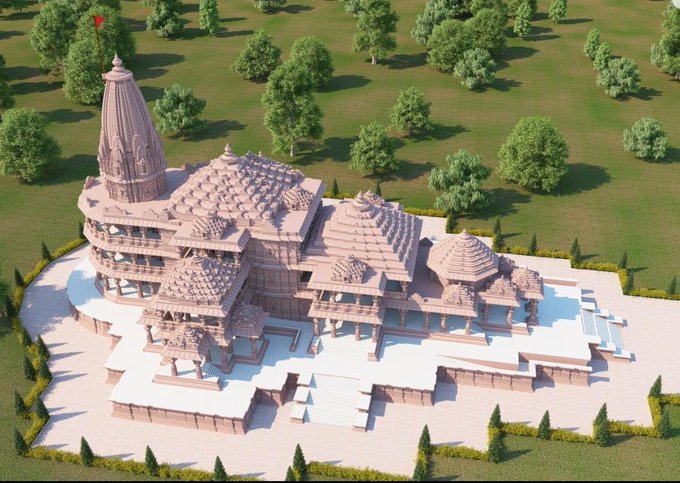 New Delhi–The Congress is now out to highlight the party’s contribution to the construction of the Ram Temple, whose ground breaking ceremony is scheduled to be held in Ayodhya on Wednesday with Prime Minister Narendra Modi in attendance.

Congress leaders are making statements so that they should not be seen to be left out of the historic event.

On Tuesday, Congress General Secretary Priyanka Gandhi issued a statement saying that the construction of the Ram Temple will be a marker of national unity, brotherhood and cultural harmony.

Former Madhya Pradesh Chief Minister Kamal Nath organised a recitation of the Hanuman Chalisa at his residence in Bhopal and said that “We are sending 11 silver bricks to Ayodhya from the people of Madhya Pradesh. Tomorrow (Wednesday) is the historic day for which the entire country was waiting.”

Congress spokesperson and Lok Sabha MP Manish Tewari also congratulated the people of the country on the occasion. The Congress has welcomed the decision of the Supreme Court which paved the way for the construction of the Ram Temple in Ayodhya. Congress leaders are now trying to claim credit as former Madhya Pradesh Chief Minister Kamal Nath said that late Prime Minister Rajiv Gandhi wanted to build the temple.

The Congress which has not been invited for the official programme organised by the Temple Trust does not want any controversy and the party categorically said that it is the prerogative of the Trust to decide the guest list. On Tuesday the party said that it is happy that the Ram Mandir is finally being constructed.

Senior party leader Jitin Prasada said that “The Congress party has already welcomed the construction of the Ram Temple. It is a matter of faith for every Hindu and also personally for me. I am happy that the Ram Mandir is being constructed.”

In Chhattisgarh, where the Congress is in power, the government has initiated a new tourism circuit that will connect all the important places which Lord Ram is said to have visited during his exile from Ayodhya. The state government has identified 75 places for the Ram Van Gaman Path.

The Congress is highlighting the work done by the previous government and the contributions of late Prime Ministers Rajiv Gandhi and P V Narasimha Rao towards the Mandir issue.

The party leaders are saying that Rajiv Gandhi was the first to make serious moves on the Mandir issue. When he was the Prime Minister he allowed the opening of the locks of the Ram Mandir and then facilitated the Shilanyas there in 1989.

During the tenure of PV Narasimha Rao the demolition of the disputed mosque took place in 1992 and under his government the adjacent land was acquired. (IANS)