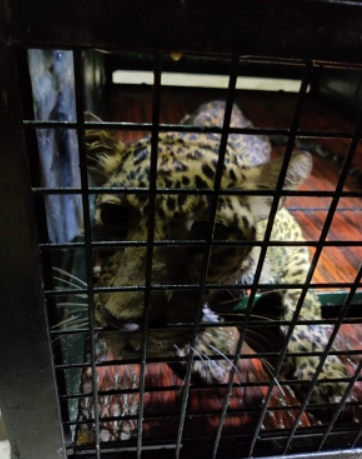 Bengaluru–Karnataka forest department officials have rescued an enfeebled female leopard, trapped at the bottom of an 80-foot deep well for six days at Karapur village in the buffer area of Nagarhole Tiger Reserve, an official said on Tuesday.

A villager first saw the 2.5-year-old leopard on top of the abandoned well 5-6 days ago and assumed that would leave soon.

However, after three days, he heard echoes of the big cat crying from the depths of the dry well, which prompted him to alert the forest department.

“By the time the villager reached out to us, the feline had already spent three days inside the well. We struggled a lot just to analyse and devise a strategy to rescue it,” said Kumar.

To further complicate the rescue prospects, the leopard was not at all responding to the lurings and tactics of the forest officials such as a trap, bait or meat as it hid inside a crevice at the bottom of the well.

“Even a bait failed to attract the animal’s attention despite suffering starvation and dehydration for six days. It had absolutely no energy. We even put some ladders for the big cat to climb,” Kumar said.

Some chicken and mutton did not appeal to the hungry big cat while a live chicken bait also suffered the same fate.

After several attempts, on Sunday, the leopard came out to slurp some water which the forest officials had arranged at the bottom of the well.

The rescue efforts also included hiring a fabricator to design a makeshift cage for a forest ranger to lock himself in it and descend into the depths of the well, yet he failed to stimulate the leopard for a rescue.

Hard-pressed, Kumar said the department also took some technical help to set up a CCTV camera near the crevice with illumination to obtain footage and images of the leopard to monitor its behavioural patterns in a bid to save its life.

After all the efforts failed, he said the officials realised that it is better to tranquilise the leopard with an immobiliser injection to net it and raise it up.

“Finally, we lowered a sharp shooter to dart the leopard with an immobiliser, put a net and ultimately managed to bring it outside the well,” said the Indian Forest Service (IFS) official.

Following the animal’s retrieval, the veterinarians administered a Reversin injection to revive the leopard for treatment.

As it was starved and thirsty for days together, the vets injected intravenous fluids to restore its health and energy.

Commenting on the future of the leopard, Kumar said the forest department will take a call after the veterinarians decide if it is fit to be released into the forest.

The leopard is found to be in good health now.

“More than 100 forest department staff and officers, supported by the local villagers, enabled us to bring out the leopard alive,” said Kumar, crediting the success to a team effort.

Karapur village in HD Kote taluk is about 200 km southwest of Bengaluru.

The Nagarhole Tiger Reserve stretches between Kodagu and Mysuru districts, covering an area of 643 sq km. Some of the animals which thrive in the reserve include tigers, panthers, wild dogs, elephants, bisons, deer, sloth bears, wild boars, common langur, bonnet macaque and a variety of reptiles and birds. (IANS)