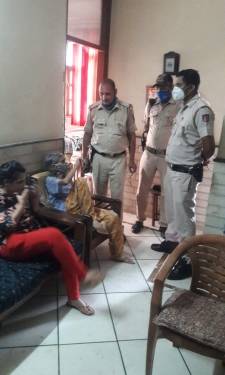 New Delhi– An 84-year-old woman accidently locked herself inside a bed box in her house in Central Delhi’s Karol Bagh on Thursday afternoon. Old age and weakness didn’t let her come out on her own and she got stuck. Luckily, her granddaughter, who had installed CCTV camera in the room, noticed the accident and immediately informed the police.

“She had noticed through the CCTV camera, which she was monitoring on her mobile, that her grandmother while trying to open the box of a double bed lost control and locked herself inside the box. The police team rushed to the spot on the second floor of the house in Dev Nagar, Karol Bagh,” said Sanjay Bhatia, DCP, Central Delhi.

They found that the main door of the flat was locked from inside. Without wasting time, the police arranged hammer and an iron rod and broke open the iron door of the flat. The police found the woman, Sworsh Kohli, inside the box of the bed.

She could not come out of the box due to her old age and weakness. In the meanwhile, the caller, Nancy, and her husband also reached the spot from Alaknanda in South Delhi. The old woman is stable and ok. The family thanked police for prompt action which saved the life of the woman. (IANS)