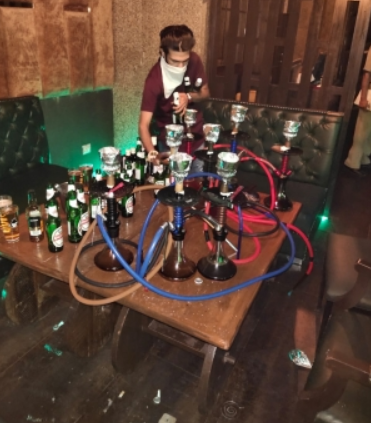 New Delhi–There was smoke all over the place, some hookahs in vibrant colours were kept neatly on a table with men and women sitting around taking long puffs from the hookahs as music played on. Loads of beer, with other high end brands of liquor flowed freely. This was the scene at a rave party organised on Tuesday night inside a restaurant, flouting Covid guidelines.

Then a team of men in khaki entered the restaurant Playque in Paschim Vihar East in Outer Delhi. Everything stood still, the dance stopped and the music died. Station House Officer Krishan Ballav Jha with his team spent the next few minutes rounding up people and taking down their names.

“During the raid a total of 31 people including 7 women were found present violating and flouting lockdown conditions in the Playque restaurant at Pushkar Enclave, Paschim Vihar by way of drinking alcohol, puffing on hookahs and dancing. Seven bottles of liquor of different brands, 4 quarters and 77 beer bottles (all unused) and about a similar quantity of used liquor bottles and 8 hookahs were recovered from different tables,” said a senior police officer.

The owner Lavish Khurana along with his brother Kashish Khurana were booked under different provisions of the law under the Indian Penal Code.

“The offence being bailable against 29 other persons, they were released on bail,” said the officer.

Police said the restaurant does not have a licence to serve liquor. The police added that they took proper precautions while conducting the raid and all proper social distancing norms were followed.

Earlier in June this year, Delhi police raided west Delhi’s popular eating joint Qubitos which reopened after being shut for almost three months. The restaurant got into trouble as 38 persons were nabbed for celebrating a birthday party while allegedly violating all social distancing norms. (IANS)