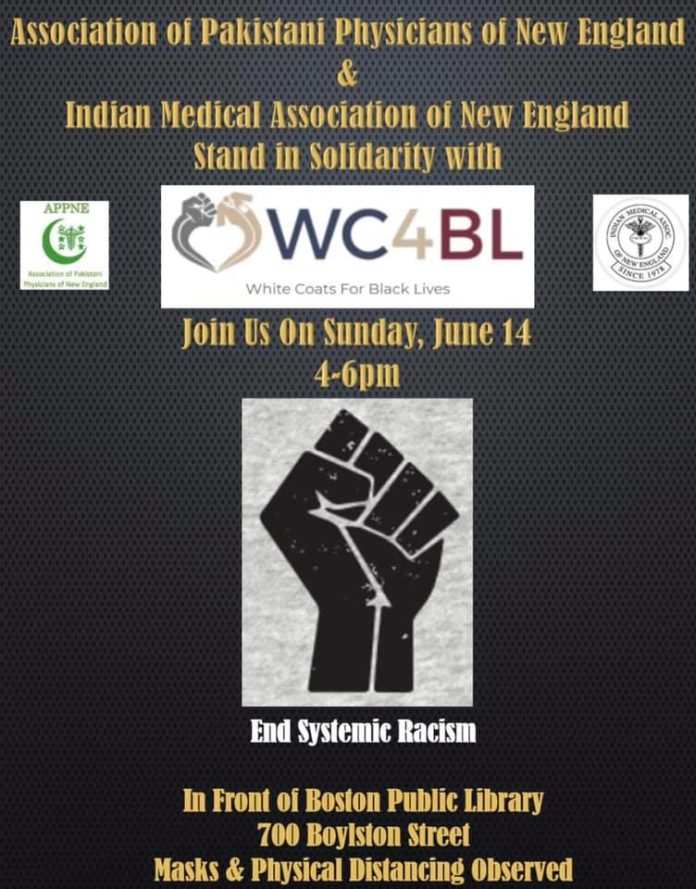 BOSTON: In solidarity with the movement for justice, peace and racial equality growing across the USA and internationally, the Association of Pakistani Physicians of New England (APPNE) and the Indian Medical Association of New England (IMANE) are holding a #WhiteCoats4BlackLives rally in Boston on Sunday, June 14.

“As a physician viewing the situation from the trenches, I have seen the racial disparity brought out by this pandemic,” says infectious disease specialist Dr. Asimah Qayyum of Framingham who initiated the event.

“We have to think beyond ‘charity’ and ‘handouts’ to make systemic change,” says co-organizer Dr. Salman Malik, an oral surgeon in New Hampshire.

Both physicians have lived in the USA for nearly three decades each and are American citizens. “We’re American first, Pakistani second,” says Dr Malik.

Speakers at the rally include Alicia Barrow, co-founder of Safe Spaces for BIPOC, who is coming down from Vermont for the event, as well as representatives of the endorsing organizations.

Physicians and health workers around the country have been converging under the White Coats for Black Lives banner at their hospitals and institutions. This may be the first such demonstration in a public place, with allies from human rights and racial justice groups.

Police kill an average of 1000 people annually in the USA, mostly with firearms but sometimes using no weapons. This year, police have already killed over 450 people even amidst the global coronavirus pandemic. The victims are disproportionately African American or Black. The perpetrators are rarely, if ever, punished. The legal doctrine of qualified immunity in United States federal law freezes the constitution, shielding police officers and other government officials from being sued.

Sunday’s #WhiteCoats4BlackLives rally expresses solidarity with allies around the country and around the world to end systemic racism at this pivotal moment.

WhiteCoats4BlackLives is a medical student-run organization born out of the National White Coat Die-In demonstrations that took place on 10 December 2014 For information, visit: www.whitecoats4blacklives.org

The mission of the organization is to dismantle racism in medicine and promote the health, well-being, and self-determination of people of color.

Key goals of the organization are:

1. Foster dialogue on racism as a public health concern

· Advocate for the funding and promotion of research on the health effects of racism.

· Demand that academic medical centers serve the healthcare needs of their local communities, particularly the needs of patients of color.

· Promote the allocation of funding for interventions that dismantle racism in the delivery of medical care.

· Ensure equal access to medical care by advocating for the establishment of a single-payer national health insurance program.

3. Prepare future physicians to be advocates for racial justice

· Improve the recruitment and support of Black, Latinx, and Native American medical students.

· Develop national medical school curricular standards that educate current and future medical professionals on the history and current manifestations of racism in medicine, principles of anti-racism, and strategies for dismantling structural racism.