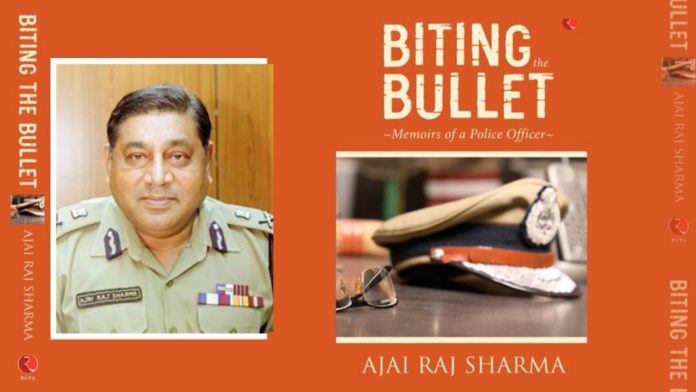 New Delhi–The sight of a mellow dawn breaking over the city’s ghat’s or the light of a thousand diyas brightening the Ganga river at dusk might have inspired Mirza Ghalib to label it the Mecca of India but administratively, few cities are as complicated as Banaras, the hometown of then Uttar Pradesh Chief Minister Kamlapati Tripathi. Its “professional goondas, communal factions, a fractious student community and politicians of all hues made the city a seething cauldron ready to spill over at the slightest pretext”, writes Ajai Raj Sharma, who went on to become Delhi’s Police Commissioner, in his memoirs of his posting as the city’s Superintendent of Police (SSP) early in his IPS career.

He joined at the same time as the new District Magistrate (DM) and the SSP, with the latter having to go on leave to attend to his ailing wife, leaving him in charge.

“With no experience of administering a district and that too, a complicated one as Banaras, I was understandably nervous at the prospect. My first challenge came sooner than I had anticipated,” Sharma, who retired at the DG of the paramilitary BSF, writes in “Biting the Bullet – Memoirs of a Police Officer” (Rupa/pp 186/Rs 495).

Within days of his joining, a contentious Bill relating to the Aligarh Muslim University was tabled in parliament and its “repercussions were felt rather strongly’ in Banaras, though it was 700 km away, with the Muslim community “very sensitive” to the autonomy of the institution and “not pleased” at any infringement in this respect.

“The Muslim community in Banaras decided to gather force and launch a large-scale protest against the Bill on a Friday,” and with the DM away on an inspection, Sharma was left holding the fort. Just as he had finished reviewing the security arrangements, word came through that a large crowd had gathered in the area of the Dashahswamedh police station.

“All it took was a couple of incendiary speeches and the crowd became restive. Some people started throwing bricks. By the time we reached the scene, there was a crowd of about three thousand people, shouting slogans and pelting stones. A PAC picket posted at this spot had already been overrun and most of its men had been injured and could hardly stand on their feet,” Sharma writes.

When he approached with just four policemen, he was advised to retreat and take shelter till more force arrived. Instead, he asked for the teargas squad which was located nearly and instructed for an additional company of PAC to be despatched as soon as possible.

He also tried to engage the leader of the mob through a loud hailer, saying the gathering was illegal and must disperse otherwise the police would have no option but to use force.

“Overtaken by mob frenzy, the leader was very abusive in his reply. A big stone was hurled in my direction. It shattered the windscreen of my jeep. More stones followed and then, some makeshift incendiary devices. Fortunately, none of us was injured,” Sharma writes.

He then asked for a teargas gun with a hundred-yard shell and fired it in the direction of the leader of the mob.

“It exploded loudly near him and injured him in the thigh. The members of the mob began to shout: ‘Firing ho gaye, firing ho gayi’ (they have started firing at us, and began to run helter-skelter. The mob had been dispersed without a lathi-charge or resorting to fire,” Sharma writes.

Meanwhile, the PAC company that had been requisitioned arrived, immediately took charge, arrested dozens of people and took the injured man to hospital.

“A serious situation had been deferred, not averted,” Sharma writes, adding there was a “strong possibility” of the mob being incited into violence after the Friday prayers. It was imperative to impose a precautionary curfew but this was turned down as it was felt that Chief Minister would not take kindly to this.

“As soon as the Friday prayers were over, the city was engulfed by violence, and police had to resort to firing at nearly thirteen different locations. The result of these firings was that the violence stopped for the time being but anger simmered amongst the Muslims” and continued through the night, with several incidences of brickbatting during the night with Sharma himself having stones pelted at him “but got way with a minor injury”.

The Chief Minister arrived to review the situation in the aftermath of the violence and firmly resisted pressure from then Prime Minister Indira Gandhi to suspend the DM and the SP, saying “a difficult situation had been controlled well in time” by their “efficient handling” of the situation.

Had the Delhi Police also shown such firmness, it might have quelled the violent incidents that rocked the north-eastern parts of the capital, claiming 41 lives and injuring hundreds of othes.

With Banaras for starters, Sharma admits to the “timeless cliche that there never was a dull moment” in his career.

If the ravines of Chambal literally made him run through the terrain, sometimes in jeeps and often on foot, the postings in Agra, Bareilly, Benares (Varanasi), Banda, Farrukhabad, Aligarh, Allahabad (now Prayagraj), Meerut and Lucknow made him realise the significance of administering big districts.

“Some of these districts were politically significant while some were communally sensitive. In short, the police administration was often sitting on a tinderbox,” Sharma writes.

Aligarh, in particular, taught him “the importance of communicating with the civil society and winning their confidence. It was there that I discovered an effective way to win over local youngsters…through sports”, a practice that Sharma would replicate not only in the civilian-police interface in other areas but within the force itself to develop esprit de corps.

Sharma writes about the meticulous planning that went into the elimination of five dreaded gangsters – Omkar Singh Yadav (Bareilly), Phoola (Chambal), Jarman Singh, Sheodan Kachhi (both Farrukhabad) and Sriprakash Shukla (originally from Gorakhpur who was gunned down after an inter-state chase. The credit for eliminating these dacoits rightly goes to Sharma and earned him two President’s Police Medals for Gallantry.

Sharma surprisingly whizzes through his three years as the Delhi Police Commissioner, devoting just 23 pages to a period during which the force scored four major successes – the cricket match-fixing case of 2000 (in which bookie Sanjeev Chawla has just been extradited from Britain), the Red Fort terrorist attack of December 22, 2000, nabbing the murderer of reformed bandit Phoolan Devi and snaring the conspirators of the December 13, 2001 attack on Parliament.

Still, “Biting the Bullet” is a valuable addition to the slowly growing literature on policing in India.