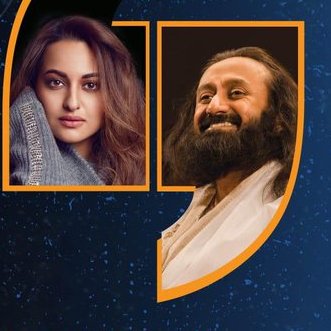 Mumbai–Actress Sonakshi Sinha was trolled for being “dumb” by netizens for failing to answer a question related to Ramayan a while ago. In a recent live interaction with Sri Sri Ravi Shankar, the spiritual leader advised her to let the trolls be.

It all happened in 2019 when Sonakshi appeared on the Amitabh Bachchan-hosted quiz show “Kaun Banega Crorepati”. She was asked for whom did Hanuman bring Sanjeevani Booti in the Ramayan and couldn’t give the answer instantly.

In a recent live interaction with Sri Sri Ravi Shankar, she shared the details of the incident.

“I participated with a contestant. A question was asked on Sanjeevani Booti, and for a moment, both Ruma (the contestant) and I went blank. Honestly, it was a bit embarrassing since we have grown up reading and watching Ramayan. But it was really long ago,” the actress recalled.

She said it’s disheartening that people still troll her over “one honest mistake”.

The spiritual leader advised her to not take the trolls seriously and said that people often try to find mistakes in others, so she should take it positively that they were only harping on one mistake and not more.

She also shared the takeaway from Ramayan.

“Ramayan was about Lord Ram teaching everyone how to be a better human being, a better son, better father, to be a better husband, and without taking that learning from him (Lord Ram), these people just sit and attack me,” she said.

Sri Sri Ravi Shankar pointed that everyone has a different mindset, and told her: “You should take it (trolling) lightly”.

The interaction is available on Helo app. (IANS)