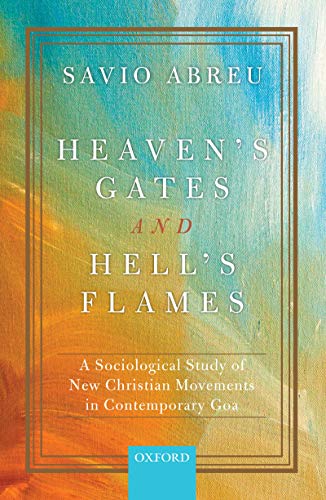 New Delhi–Even as tourism, mining, and real estate take cemtre-stage in the coronavirus-triggered lockdown in Goa, a scholarly new book sheds light on the rapid spread of Pentecostal-Charismatic Christianity, dubbed the worlds fastest-growing movement, saying there is adequate space for New Religious Movements (NRMs) like these to co-exist in a state where Christians – the majority of them Catholics – account for 24 per cent of the 16 lakh population.

“Having been brought up in a traditional and orthodox Catholic family in Goa, I was never exposed to the new Christian sects (as Pentecostals, neo-Pentecostals, Charismatic Christianity are dubbed), though occasionally one heard stories of Catholics joining these groups; people who were generally unhappy with the Catholic Church and were thus lured by the money offered by the these well-financed Protestant groups,” writes Savio Abreu, a Catholic priest belonging to the Society of Jesus and an assistant professor of sociology and anthropology at St. Xavier’s College, Mumbai, in “Heaven’s Gates and Hell’s Flames – A Sociological Study of New Christian Movements in
Contemporary Goa” (OUP).

His interest in these groups was first aroused when he noticed changes in his cousin, “who had become a Believer. She was quoting with ease from the Bible and aggressively questioned me about my faith and my understanding of the priestly vocation,” adds Abreu, who served as the director of Goa’s Xavier Centre of Historical Research (XCHR), Goa, from 2011 to 2018. He notes that his mother was apprehensive when he took up the projecting, stating: “‘Be careful, they may convert you and you may end up becoming a Believer.”

Many of his companions and colleagues even “made snide remarks on my choice of such a ‘frivolous’, ‘quaint’, and ‘peripheral’ topic, which seemed far removed from relevant sociopolitical and economic issues of development such as tourism, mining, or real estate, ‘where the action was’,” Abreu adds.

To this end, the book is both a descriptive and analytical commentary on the everyday practices of the Pentecostal–Charismatic Christians in Goa.

“Since the subjects of my ethnographic fieldwork belong to the Pentecostal–Charismatic branch of Christianity, it is necessary to understand what this form of Christianity is all about and how it is different from other forms of Christianity. Pentecostalism (according to one researcher) is a 20th century phenomenon with roots in the
Evangelical, Methodist, and Perfectionist movements of the 19th century.

“The crucial difference between Pentecostals and other Christians is the Pentecostals’ unique emphasis on the person, work, and gifts of the Holy Spirit. Pentecostals (are profiled among) the groups that profess at least two religious crisis experiences – water baptism or rebirth and baptism of the spirit – the second being different from the first one,” Abreu explains.

“Pentecostalism within the Catholic Church has spread in just three decades to almost every corner of the Christian world, numbering around 119 million Catholic Charismatics in 2000. This is a remarkable achievement for a movement just over 30 years,” Abreu maintains.

He chose Goa, because both the CCR, which entered the state in 1974, and the numerous independent neo-Pentecostal groups that have sprung up since the 1980s have grown rapidly and spread all over the state.

Another reason for choosing Goa is that with its long colonial history of nearly 450 years of Portuguese rule with a distinct Latin Catholic influence, and a near total absence of Protestant Christianity, which strongly influenced the rest of India, Goa represents a rather unique religio-cultural case.

Thus, the book studies the impact of the fastest growing religious movement of the 20th century on the history, society, culture, and everyday life-practices of the Goans. While studying how Pentecostal–Charismatic Christianity has impacted and has been influenced by Goan society and culture, it analyses the causes – both
local and global – and the historical roots of the emerging movement.

Chapter 1 is a historical account of the emergence of the Pentecostal–Charismatic movement in Goa. Chapter 2 shifts back to the present structure and organization of the Catholic Charismatic and neo-Pentecostal movements.

The chapter also describes the profile of their members. Chapters 3 to 6 deal with the ethnographic data on the two movements.

The final chapter attempts to bring all these different themes together and build a cohesive, though not necessarily conclusive, mosaic of Pentecostal–Charismatic Christianity in a pluralist and non-Christian context.

“On a crowded highway in the midst of chaotic traffic, the chances of survival and reaching one’s destination depend on unquestioning obedience to authority, and so members of neo-Pentecostal sects willingly accept new markers of identity and disciplining activities that tend to have an element of rigour,” Abreu writes.

“The field of NRMs in India, with their distinct modes of interaction with mainstream religious establishments; their processes of influencing and being shaped by socio-economic change, modernization, secularization, and globalization; and their specific religious identities, beliefs, rites, and rituals will take shape and grow as
more studies on new religions in various parts of India are conducted.

“My earnest hope is that many more similar ethnographic studies are done in the future so as to contribute to this important field of NRMs in India,” Abreu concludes. (IANS)