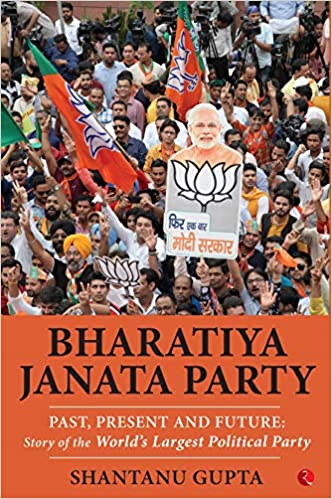 As the Congress ruled the government for decades after Independence and the left ruled the academia, the story of the nationalist movement — from the Arya Samaj to the Hindu Mahasabha to the Rashtriya Swayamsevak Sangh(RSS) to the Bharatiya Jana Sangh (the BJS) to the (BJP) — never got narrated in its entirety and purity. This book seems like an honest attempt of the author, Shantanu Gupta, to document the past, present and future of the idea of BJP, the world’s largest political party.

Gupta, the author of the book, feels that the whole of Bharatvarsha, from the Himalayas to Kanyakumari, is and has been, a living organism, through the ages — geographically, culturally and historically. Bharat is an ancient nation and Bharatiya nationalism, therefore, must naturally be based on undivided allegiance to Bharat as a whole and her great and ancient culture, which distinguishes her from other lands. According to him, the BJP of today is the latest political manifestation of the years of nationalist movements that India has seen. Through the story of the world’s largest political party, the BJP, this book explores the history of nationalist movements in India.

Gupta says that, on March 29 2015, at the BJP’s old office at 11, Ashoka Road, a digital counter was ticking. Party workers, office-bearers and staff, all were staring at the digital screen. It showed the total number of party members enrolled through the party’s new ‘Sadasyata Abhiyan’, or membership drive. The party’s national president, Amit Shah, was in office that day. When he came to check the digital counter, there was child-like eagerness in his eyes. Fortunately, the author was witness to that moment. As soon as the counter hit the target, the whole office erupted in euphoria.

The jubilant party president, who is known to be a strict taskmaster, was not able to hide his joy. The ambitious membership drive was his idea. To him, a base of active members was a device to consolidate the BJP’s freshly achieved eminence. Next day, every leading newspaper reported it bold and clear: The BJP becomes the largest political party in the world. National dailies reported that the ruling BJP had become the largest political party in the world with its enrolment drive in the past five months taking its membership to 8.80 crore. The Communist Party of China was until now considered the largest party with about 8.60 crore members. That very day Gupta decided that the story of this phenomenon had to be narrated to the world.

When Gupta finished writing this in the book towards the end of 2019, the BJP was the world’s largest party by membership size, with more than 18 crore members. It was ruling in 17 states, directly or through partners. It was able to get good vote share even in Kerala and West Bengal. It was no more a party of north India or the cow belt.

The Prime Minister, the President of India, the Vice President and the Lok Sabha Speaker are all from the BJP. At no other time in history has any non-Congress party been this dominant in India’s polity. In many ways, the BJP today is where the Congress used to be in the 1950s. This book helps the readers to track the journey of BJP, from way before its formation year of 1980.

Gupta emphasizes the point that though the BJP was formally founded in 1980, its political journey started with the formation of the BJS in 1951. The BJS has his roots in the RSS and in other dharmic, cultural and nationalist movements before it. So, to understand the BJP, we have to go to the roots, the formations, the ideas, the leaders and the ideological frameworks of the the BJS, the RSS and the other movements before them, right back to the Arya Samaj and Hindu Mahasabha. It’s also worth the reader’s attention to read about the forces, external and internal, that were weakening India over thousands of years and understand the need for a nationalist movement and a nationalist political party. This book has covered a time frame of a little over 160 years — from 1857 to 2019.

The book unravels many of today’s debates. Today’s Gharwapsi debates have their roots in the Shudhi Andolan of Arya Samaj in which Swami Sharaddhanand lost his life. Today’s Hindutva and nationalist doctrine has its roots in the ideas of Savarkar, debates around cow find its history in the cow protection movements of 1881, today’s political tactic of Muslim Appeasement has its roots in the divisive ideas of Sir Syed Ahmed, today’s corrections like removing article 370, implementing the National Citizen Register (NRC) and the Ram janmabhoomi verdict were necessitated by major political blunders of the past, today’s dissolution of centralized top-down governance structure of Planning Commission, finds its roots in BJS’ initial manifestos. This book traces many more of such ideological and policy threads down memory lane.

The book divides this 160-year journey into five broad parts: why we need a nationalist political alternative, nationalist movements before the RSS — Arya Samaj and Hindu Mahasabha — the phenomemon called the RSS, the BJS and, finally, the BJP.

The book ends at Prime Minister Narendra Modi taking oath of office for the second time in 2019. There are some books on BJP, which cover a particular election victory, some covers BJP’s election machinery, some cover BJP through the biographies of important leaders of BJP, some cover BJP as just a post 1980 phenomenon.